Great sacrifices were made at the Battle of Antietam. And one very small one.

Charles ‘Charley’ King was from West Chester, Pennsylvania. He was the oldest child in his family, but only 12 years old when the Civil War began and northern units began to organize and train. Charley was fascinated by all the activity and he also loved to make music. He begged his father to allow him to enlist as a drummer boy. Attitudes toward children were different at the time, but even for Civil War parents, 12-years old was very young to enlist in the Army. Boys that age, however, can be very persistent. And Charley managed to gain an ally. Company F Captain Benjamin Sweeney noticed him practicing his drumming near the camp where the 49th Pennsylvania was training. Sweeney was not only involved with the training, but also recruiting soldiers. Sweeney was impressed with both Charley’s determination and drumming skills. He had a talk with Charley’s father that drummer boys were non- combatants and not really in danger. He said the boys were usually behind the lines and in safe positions helping with the wounded rather than on the battlefield. He promised he would keep Charley safely away from danger and look after him. Of course there was no way that he could possibly ensure this. But in fairness to captain Sweeney, very few people at the time realized what a blood bath the Civil War would become. Most had highly unrealistic, romantic ideas about battle and thought the War would soon be over. So Charley’s father gave his permission. We are not sure if mother had any say in this.

The family agreed to let the oldest of their five children enter the war. 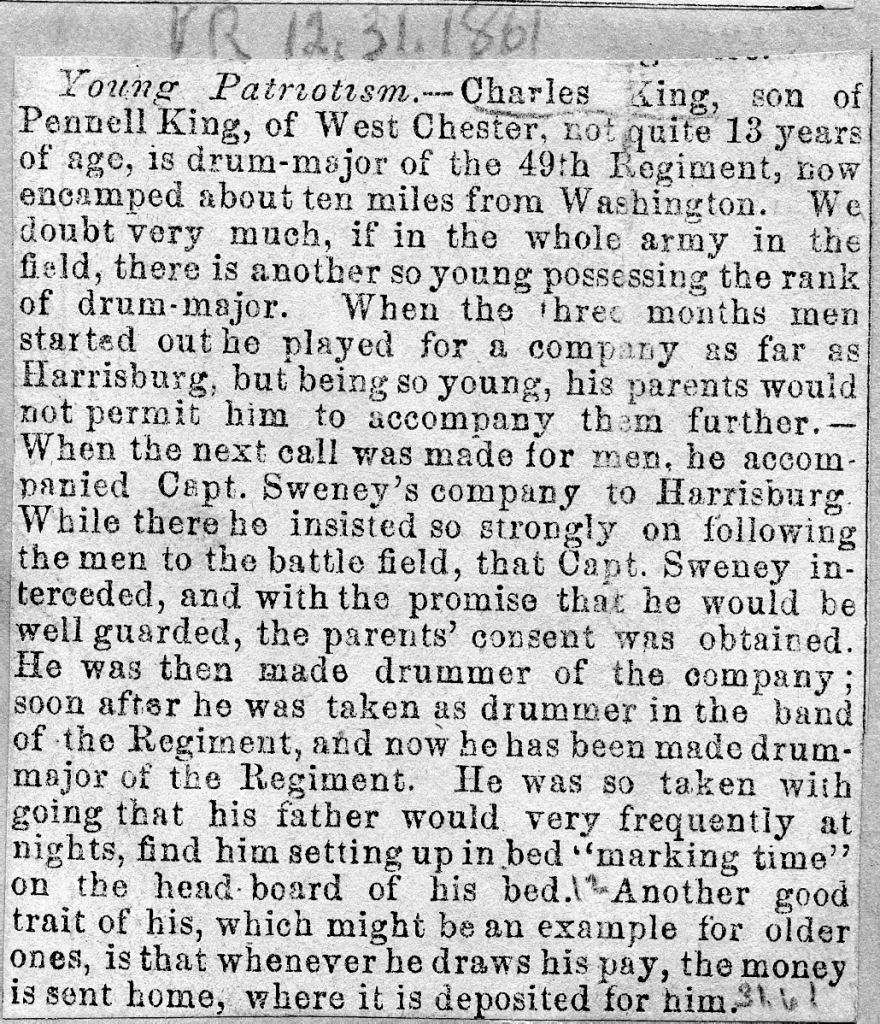 Charley performed well as a musician-drummer boy with the company, impressing the men and officers so much with his drumming that he was promoted drum major of the field music of the Forty-Ninth Pennsylvania Regiment. It was a distinct honor for such a young volunteer. After participating in the 1862 Peninsula Campaign, Charley was a veteran, something that few of his age could claim.

With the movement of Lee’s Confederate Army of Northern Virginia into Maryland in September of 1862, Charley marched with the rest of the Federal Army toward Western Maryland and a showdown with the enemy on Sept. 17, 1862, The Battle of Antietam – the bloodiest single day of fighting in the Civil War.

The 49th Pennsylvania was in a reserve position. Confederate artillery, however, hammered the Regiment, during the battle, wounding several men. Enemy artillery exploded near the Forty-Ninth Pennsylvania, wounding several men including Charley, who was shot “through the body” by a piece of shrapnel. He fell into the arms of H.H. Bowles of the 6th Maine, who gentled Charley’s shock, preventing him from being thrown to the ground. Bowles carried Charley to a field hospital in the rear. Medical care was, however, primitive at the time, and Charley, having been shot through the lung, died 3 days later from his wound. He was one of more than 2100 Union soldiers killed at Antietem. Charley is believed to be the youngest soldier of either army to be killed during the 4 years of fighting. A few younger boys served in the war, but Charley apparently was the youngest combatant killed as a result of a battlefield wound.

Charley’s father, though only ten miles away, did not learn of his son’s death until he returned home from an emergency militia assignment, nine days later. Charley, meantime, had been placed in a temporary grave at Antietam. His body was later moved, but its final location is unknown. His drum and a few of his effects are on display at the Antietam Battlefield Visitors’ Center Museum. 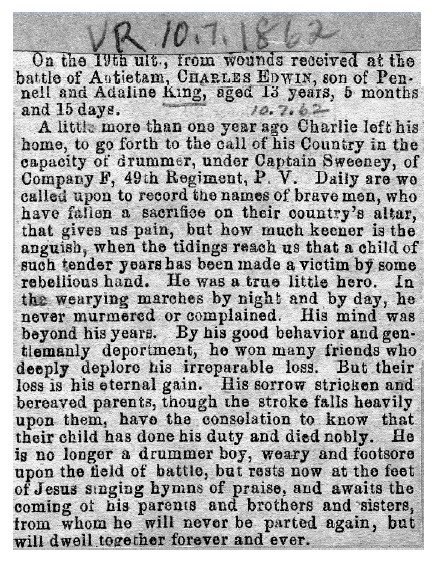 Information for this section was contributed by Andy Waskie. Image Courtesy of The State Museum of Pennsylvania

On Saturday, June 18, 2005, Brendan Lyons, of West Chester, PA, completed his Eagle Scout project, culminating in a memorial service for Charley King and recognizing his ultimate sacrifice as the youngest Union soldier in the Civil War to be killed as a result of battle wounds.

A memorial stone was placed in West Chester’s Greenmount Cemetery, where both Charley’s parents were buried.