“I highly recommend this series of four historical novels… I believe that books such as these are an important way of preserving our national heritage and bringing it to life for the students in our schools. They can relate to the experiences and perspective of Duane Kinkade as he lives through the central event in our national history, the American Civil War.”

The regiments and their histories in these books are real, the events did happen. 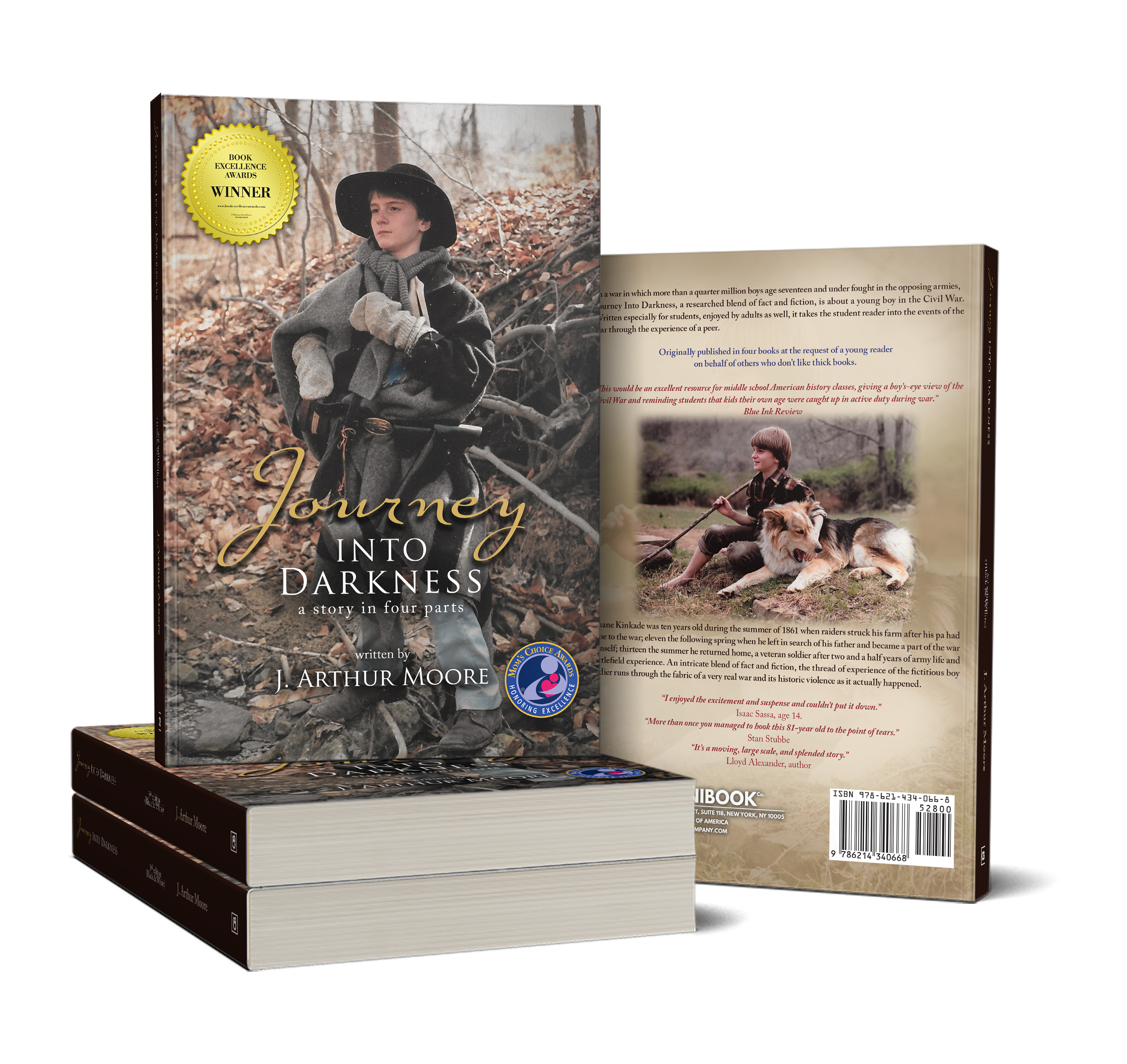 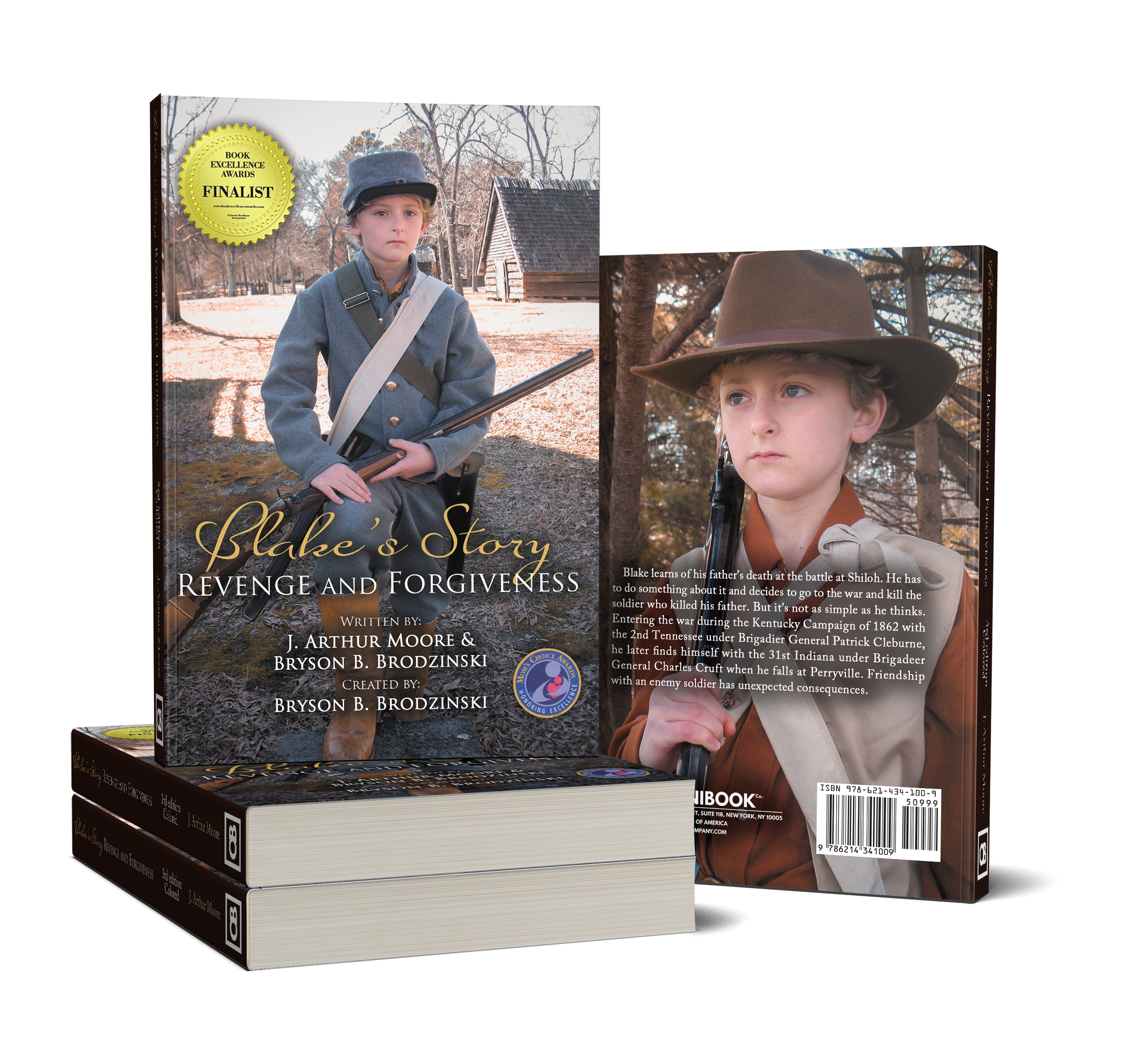 “The final revelation where Blake and Matthew discover the truth about their connection is an incredibly powerful moment, arguably the defining point of the story.”

“I found your book very interesting and educational. I have learned a lot about the Civil War through your books. I find them much more exciting than a dry history textbook. It was inspiring to see how Blake was bitter toward the enemy for killing his father, but in the end he actually met the man who killed his father and forgave him. It is a story of bitterness and anger, which turns into forgiveness and friendship.”

“Being of Native American heritage myself, the book in my opinion was moving, educational, and eye opening to the historical occurrences of the Native American tribes, government soldiers, mountain people, and towns’ people’s lifestyles, habits, and different cultures of that era. This book can be used as an educational read for schools and libraries, or for the personal enjoyment of readers interested in historical fiction. 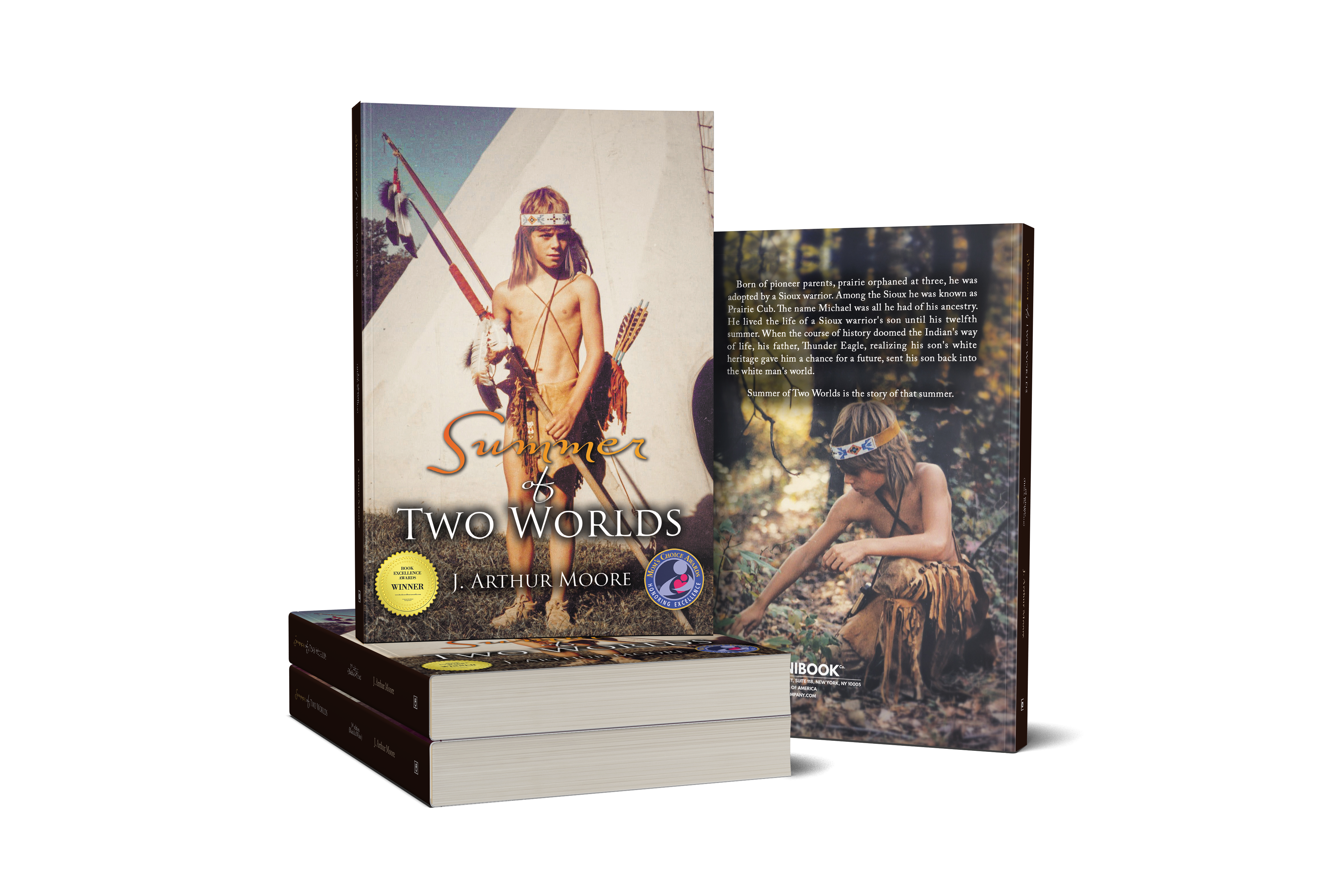 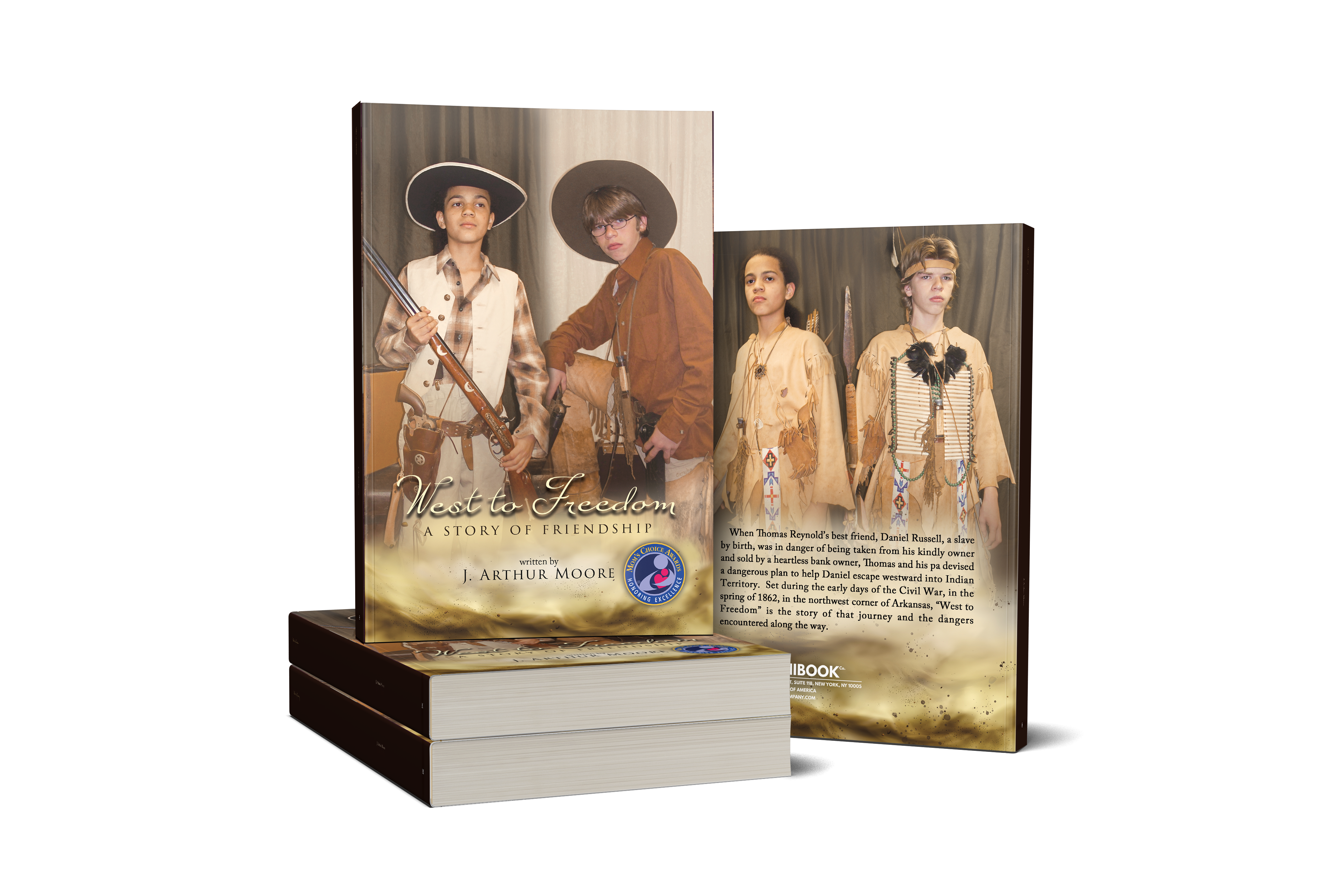 “Set in the late 1800’s, a young African-American slave escapes to Indian country with his best friend, a young white boy, to avoid being sold.”

“This short story’s concept works extremely well because of the twist it places upon its central topic. The story focuses on slavery in early America, but the relationship is that of two young boys who are best friends. According to social norms of the times, this type of friendship would have been forbidden. But due to the boys knowing each other from birth, it presents a more humanized attitude in the face of intense social opposition. Daniel and Thomas’s friendship provides an exceedingly emotional and endearing core for the story to revolve around.” Also, “the treacherous wilderness acts as a fantastic antagonist for the boys. It is full of surprises and unexpected twists and turns. The boys also face opposition in the form of other humans.”

The dark countryside flashed past outside the coach windows. Occasionally the light of a distant farmhouse could be seen. Darkness was coming on and Brett could see his reflection dimly in the window glass. The green plaid flannel shirt collar lay over his brown leather vest. His auburn brown hair, roughly cut, was slightly mussed up from his hat, which had been stowed on the overhead rack. The clear blue eyes appeared tired. Brett Tompkins had left from Baltimore the evening before. He remembered the last look at his mother, smiling and waving good-bye as tears streaked her face. The trip to Snow Shoe in the West Virginia mountains took more than two days and required transferring from the Baltimore and Ohio Railroad to the Virginia and Truckee Railroad at Truckee, West Virginia with another train transfer at Arlee. Brett had already made the change at Truckee and would arrive at Arlee in about an hour. 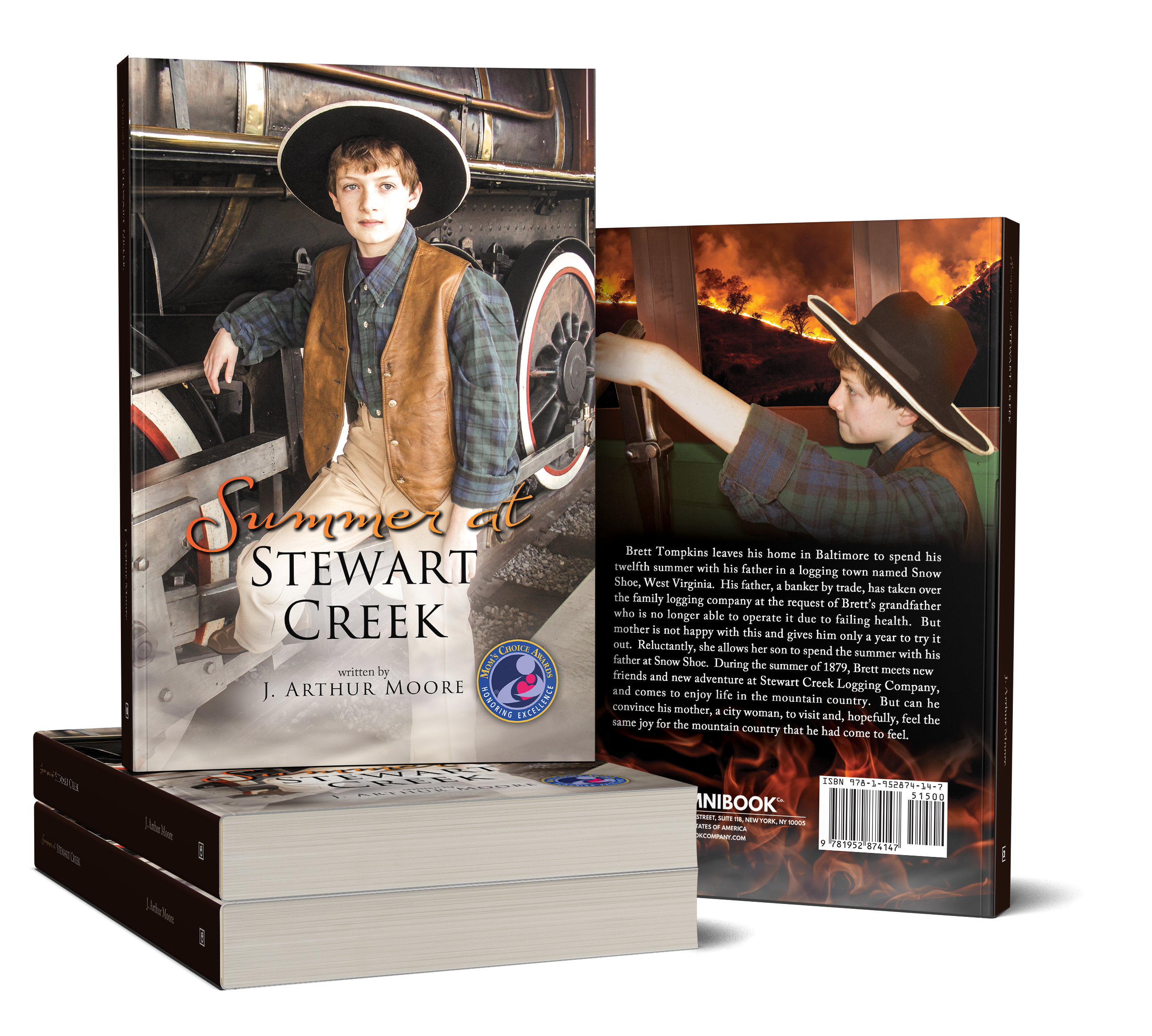 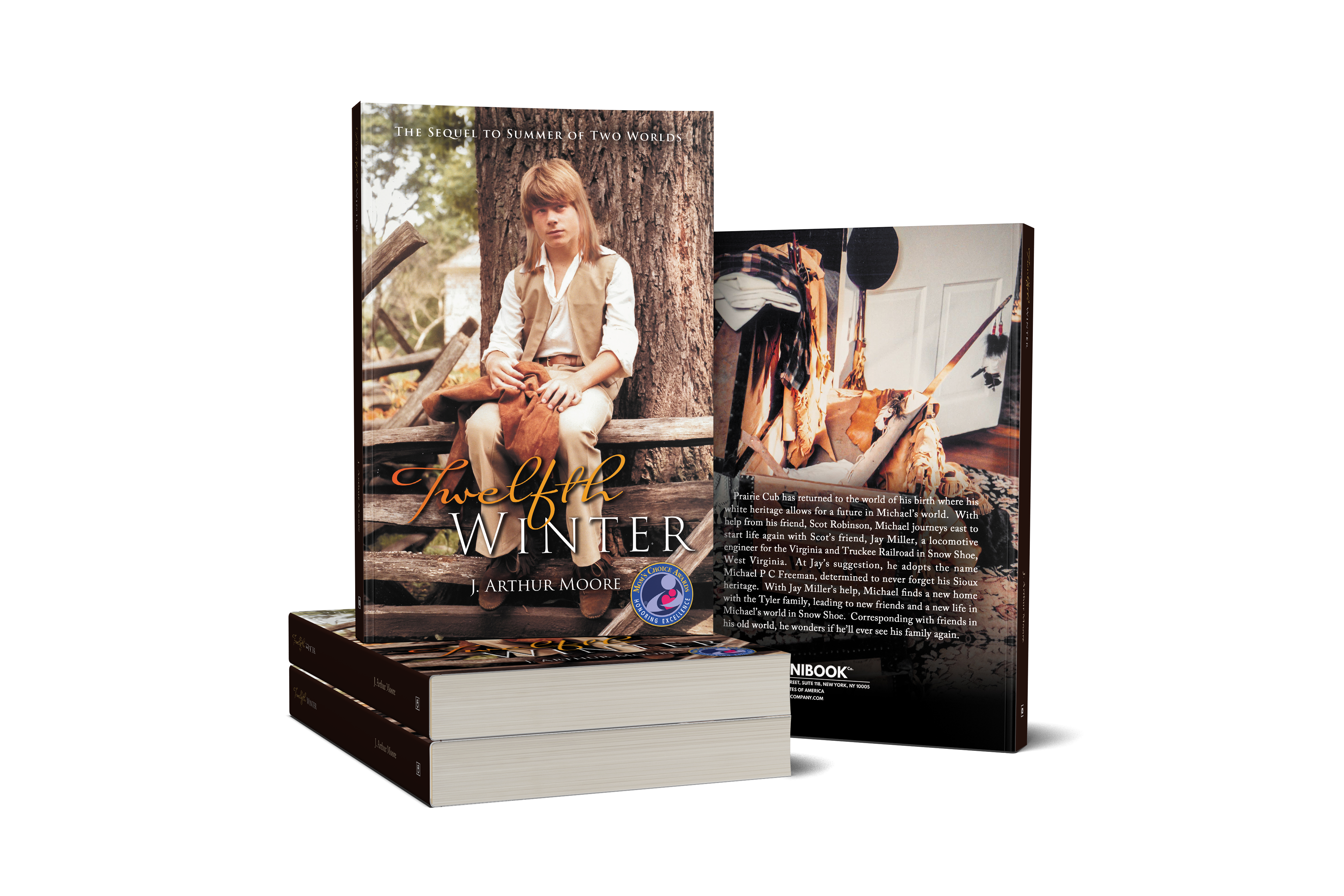 As the day played out, a subdued Jamison returned to his seat and ignored Michael during the rest of class. Mrs. Miller kept alert to any concerns Michael might have, but observed that Teddy was able to guide the older boy through the day’s lessons. Reading and writing went well. Handwriting was challenging, but Michael figured he could take the workbook home and practice the cursive letter shapes. Grammar was a total loss. The whole concept was so foreign to his experience. Mrs. Miller offered to tutor him after school and try to teach him the basics so he could work at his own level on his classwork. Likewise, he had no experience with history. The teacher suggested that she get him the history books from the lower grades and he could read up on earlier history on his own and try to make sense of the assignments in class.

Stranded in Snow Shoe, the prequel to Summer of Two Worlds, is  Scot’s story in which he arrives in Snow Shoe in the spring of 1880 in search of his uncle who is supposed to care for him until he can join his pa, a government surveyor, working somewhere in the west. His mother is back east in a hospital, chronically sick, so it’s up to Uncle Hank Fillmore to care for the boy until his pa is settled in his next assignment. But Uncle Hank has no idea the boy is coming. Unbeknownst to Scot, he’s too busy robbing trains. The boy has no one to turn to until Jay Miller, the engineer on locomotive Number twenty-one, the “R L King” steps in to help him find his uncle. Stranded in Snow Shoe is the story of a friendship and a search to reconnect a boy to his family. It is also the last unfinished piece of the Summer of Two Worlds trilogy

Boys of the Civil War

In a war in which more than 250,000 participants were underage children and youth, the history of the battlefields and military life of the Civil War is written in the journals and letters of Charles William Bardeen, William Bircher, Elisha Stockwell, Johnnie Wickersham, and other boys. Many of their stories were first shared with the public through newspaper articles recording their exploits. For example, Johnny Clem became an instant hero when he shot a Confederate officer off his horse as the officer tried to capture him. One particular event of the war was notable for the significant number of student cadets who were involved. At the Battle of New Market 250 cadets from the Virginia Military Institute fought as a unit. An exceptional collection of letters, artifacts, and biographical accounts has been gathered in the Archives of the Institute and its Hall of Valor Museum and preserved battlefield park. At the beginning of the 20th century the first collection of biographical information about boys from the war was published and Johnny Clem retired as a Brigadier General after serving thirty-four years in the U.S. Army. As the centenary approached while the vast majority of historians continued to focus on battles, campaigns, and general officers in their research and writing, and more began to be written about the common soldier participants of the war, this was a beginning of a renewed interest in the youngest soldiers. Over the years transitioning from the 20th into the 21st centuries two kinds of writings were published, written by historians from two points of view. Anthologies with photographs, citations, quotations from original diaries and journals were published, bringing to their readers a researched collection of information about the real boys from the war. Other historians researched their subjects, then turned their stories into narrative novel format without citations, designed for younger readers to learn about the war through the eyes of their peers.