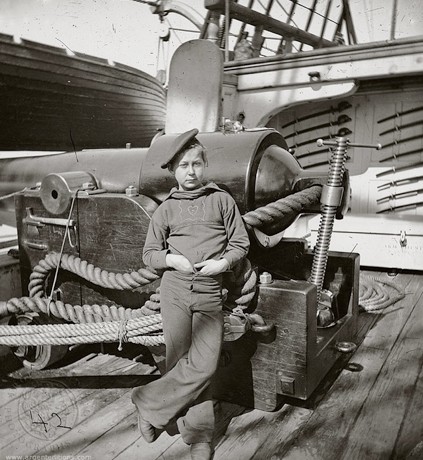 Boys, like this one aboard the U.S.S. New Hampshire, were called powder monkeys because they ran bags of gunpowder from the stores below deck to the gun crews, moving with speed and agility. These boy assistants, as young as 10 years old, slept in hammocks below the gun decks. They were selected for their job because of their speed and height – short so they would be hidden behind the ship’s gunwale, keeping them from being shot by enemy ships’ sharp shooters. 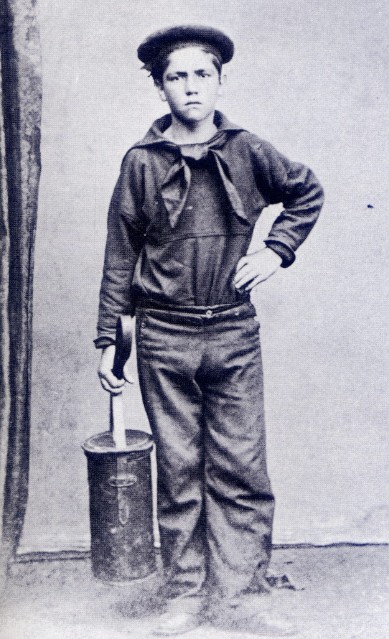 Twelve-year-old Henry Messhage was a 1st class boy or ship’s boy or powder monkey, seen here with a bag of powder for one of the ship’s guns. When not in combat, these boys served as personal assistants to the officers, cook’s helpers, and general helpers for whoever needed them, assigned to whatever odd jobs needed to be done.

George Hollat, a 16-year-old powder monkey on board the U.S.S. Varuna during an attack on Forts Jackson and St. Philip in April 1862, received the Medal of Honor for his bravery during battle. His citation reads, “He rendered gallant service through the perilous action and remained steadfast and courageous at his battle station despite extremely heavy fire and the ramming of the Varuna by the rebel ship Morgan, continuing his efforts until his ship, repeatedly holed and fatally damaged, was beached and sunk.”

Credit: Massachusetts Commanders Military Order of the Loyal Legion and the U.S. Army Military History Institute, and other on line sources under “Civil War powder monkeys”

musicians, and powder monkeys. There were many hardships. Surprisingly, most northern boys were fighting to set the South straight, not to abolish slavery.

Often bored of farm life, boys, went to fight in the Civil War. They thought fighting would be an adventure. Although officially boys were not allowed to fight, they often did. Enlisting for duty was simple. Many claimed to be 18, although they were younger, as proving age was difficult at the time. Many recruitment officers were not picky about age because they had to meet quotas of soldiers to form a regiment. The recruitment officers record keeping was sloppy, if done at all.

Even though “young boys were priceless on warships,” (A Treasury of Civil War Tales pg. 71) very few boys fought at sea. On warships, the boys were usually powder monkeys, who brought black powder and shot to the cannons from the storage areas. It was a good job for small boys because they had to run through narrow passageways and up narrow staircases.

Being a soldier was no fun task. Working as hard as men did, the boys carried heavy guns. They spent more time marching to and from war sites than they spent fighting. Often, as well as their regular duties they rubbed down horses, cooked food for soldiers, and gathered wood. When they did have free time they played card games.

Conditions were harsh for the boys at war. Boys were not accustomed to taking orders from strangers, and then they were harassed by the older soldiers. Finding food was a challenge, so sometimes boys did not receive meals. They slept in very crowded conditions. Uniforms were expensive and scarce, so boys dressed in what they could find, including some uniforms from the Mexican War. Deaths took an emotional toll on the boys. To top off the other hardships many boys became homesick.

Musicians, who could be any age, were primarily boys. Most musicians were drummer boys or bugle boys. “The beat of the drum was one of the most important means of communicating orders to soldiers in the Civil War…they were with the troops in the field, not just marching to the site of the battle but in the middle of the fighting. It was the drumbeat that told the soldiers how and when to maneuver as smoke poured over the battlefield. And the sight of a drummer boy showed soldiers where their unit was located, helping to keep them close together” (The Boy’s War pg. 40). Bugle boys, photographed less often than drummers, had a job that was of the same purpose.

The war also changed the lives of boys who did not participate in the Civil War. In some areas such as Philadelphia, “by the end of the war one out of every five textile workers was under age 16” (A Separate Battle: Women and the Civil War pg. 68). After the men went to war, the women went to work in factories to support their families. The women had to have their children come work in factories, because women did not earn as much money as men for equal work and to support their families.

The boys who went to war had many positions, such as musicians, soldiers, and powder monkeys. The war had many hardships, and when the boys came home they were greatly changed. They had seen many people die, often including friends.

The American Civil War from a Different Perspective Part 2