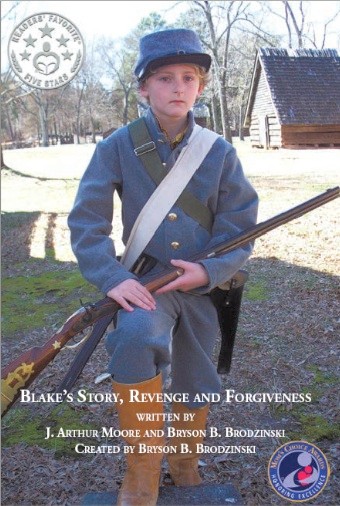 Blake’s Story, Revenge and Forgiveness takes place during the Kentucky Campaign of the American Civil War from 1861 to 1862. It is the story of Blake Bradford’s journey into the war in search of the enemy soldier who killed his father at Shiloh. The war is very real and the events of the war as seen through Blake’s story are very real.

The primary event that sets the stage for the story is the fighting on the first day at the Battle of Shiloh, and the events surrounding the fighting on that part of the battlefield known as the Hornet’s Nest. In order for the story to work, Blake’s father and Matthew Mills had to be at the same spot on the battlefield in combat with each other. Blake’s father was with the 19th Tennessee. Matthew Mills was in the 31st Indiana. On the afternoon of April 6th the 31st Indiana was with Lauman’s Federal Brigade near the peach orchard. At 2:30 that afternoon, the 19th Tennessee was with Maney’s Confederate brigade as it attacked the Federal position. It was within this history that Private Matthew Mills and Captain Micah Bradford collided in that fateful moment setting the stage for Blake’s journey for revenge.

When Blake ran away to the war he ended up in the 2nd Tennessee regiment commanded by Lieutenant Colonel John A. Butler. As part of General Patrick Cleburne’s brigade, the 2nd was a part of General Braxton Bragg’s army. Cleburne’s brigade was detached for a time and assigned to operate with Major General E. Kirby Smith as the Confederates began their invasion of Kentucky. It was into this history that Blake found himself when Lieutenant Anthony Warren discovered him at the Greeneville station. Blake experienced the battle of Richmond, Kentucky, with the 2nd Tennessee as it happened over 150 years ago. What he witnessed is what happened, including the death of Colonel Butler. The brigade was reunited with Bragg’s army within General Hardee’s Corps before the Battle of Perryville. Wheeler and Hardee did meet the night before the battle and at that meeting, Blake was assigned courier to Wheeler. Wheeler did operate on the left flank of the Confederate Army that day and was south of the main battle on the Lebanon Pike facing General Crittenden’s Union brigade of which the 31st Indiana was a regiment. It was at this point in history that Blake fell wounded and became a member of the 31st in which Matthew Mills was a private.

The 31st had left its tents and personal gear behind as depicted in the story. The brigade traveled as described, eventually returning to Nashville by early November, having experienced the extremes of 90 degree drought through freezing temperatures and snow. The regiment’s history took them into battle at Stones River wherein the men did build an impromptu stone wall in front of their position as the battle commenced. Freezing rain fell during the battle and the Confederate dead fell in piles as charge after charge was destroyed by the Union defenders, and the dead became frozen in piles in their own blood and gore. According to the history of the regiment, the 31st withdrew to Cripple Creek, about eight miles east of Murfreesboro. The next part of the story in which the regiment returns to Nashville for its equipment is conjecture based on what might have been. There is no record of how their equipment got to them following the battle and their movement away from the main army.

The 2nd Tennessee retreated with Bragg’s army and ended up at Tulahoma to the south of Murfreesboro. Thus, as Blake begins his journey homeward, he walks from the Union camps at Cripple Creek, down the tracks of the Nashville and Chattanooga Railroad to the camps with the 2nd Tennessee at Tullahoma. The journey home by railroad and wagon can be traced on a map of the times as the railroads and wagon roads are real.

Shelby, North Carolina, is a real town today and exists on maps from the time of the Civil War as well. The story before and after Blake’s time in the war is pure fiction based on the lifestyle history of the times. Places within the story are real except for the Bradford plantation and the uncle’s business.

The characters of the young soldiers within the story are based on history. Historically, over 200,000 boys, age seventeen and under, participated in the war. They saw service as musicians, orderlies, couriers, medical assistants, and soldiers. During the early part of the war in which Blake’s Story takes place, musicians had to be twelve years old to enlist. Many were younger. Union musicians were issued musicians’ swords. These were later discarded as they proved more of a hindrance than a protective weapon.

As readers follow Blake’s journey to avenge his father’s death, they will be living history as it happened, from the point of view of its youngest participants.