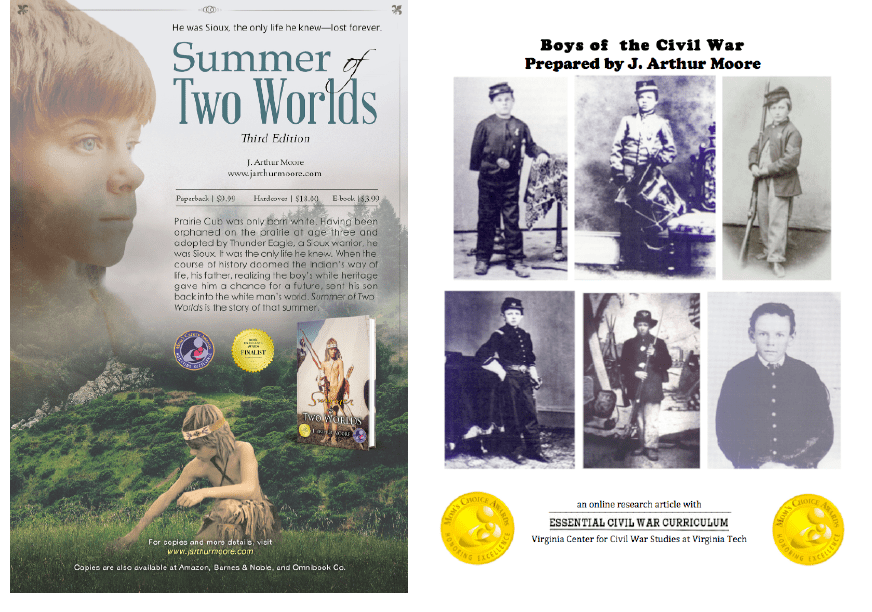 “This is a work of historic fiction. As a blend of fact and fiction, the names, characters, places, and incidents either are the product of the author’s imagination or are references to actual persons, events, and locales, blended within the context of the story, through research.” The first two titles and the four-book series [which are compiled together to create the first – Journey Into Darkness] – both Civil War historic fiction, are heavily researched so that the incidents and battles, the regiments and their histories within the stories are real, they did happen. They are written from the boy’s point of view for middle school through adult readers. Thus a younger reader can live the history as he journeys through the story with a peer. The first, the 4-part story Journey, begins in the spring of 1861 as 10-year-old Duane’s family tends their farm in rural Arkansas and the Civil War begins. Duane’s pa enlists and leaves for the war. During the summer, raiders attack the farm leaving the boy for dead and killing his ma. His letters to tell his pa of the tragedy do not get to his pa, so he decides the only thing he can do is leave for the war, find his pa, and tell him in person what has happened.

By the end of part one, an 11-year-old boy sets off to find the war. The remainder of the series follows Duane through three and a half years of war, from Shiloh to the Kentucky Campaign, to Chancellorsville and Gettysburg, ending in the Overland Campaign from the Wilderness, to Spotsylvania Court House, and Cold Harbor. There, events and news of his pa’s returning home, send the 13-year-old back home. Blake’s Story, revenge and forgiveness, is the story of 11-year-old Blake Bradford’s six months of running away to the war in search of the Union soldier who killed his pa at Shiloh, so he could kill that soldier. It takes place through the Kentucky Campaign during which his wartime experience results in friendships in both armies, including the soldier who killed his father, and the realization that the bonds of friendship are stronger than the desire for revenge. As impossible as this story may seem, an article in the reference section explains the history that makes this story possible. Both books have reference sections including source material, maps, and the history behind each character’s story.

Summer of Two Worlds takes place in Montana Territory during the summer of 1882. The summer of 1882 came at the end of the Indian War era in the western territories. It was a time when the last of the Native American people were being forced onto reservations, the Northern Pacific Railroad was under construction through Montana Territory, and the natural beauty of the west was being altered forever by the coming of civilization. It was a time in a beautiful western landscape where life ran its course with the seasons. In Summer of Two Worlds the reader enters the life of an 11-year-old boy, son of a Sioux warrior. Prairie Cub was only born white. Having been orphaned on the prairie at age three and adopted by Thunder Eagle, a Sioux warrior, he was Sioux. It was the only life he knew. The name Michael was all he had of his ancestry. When the course of history doomed the Indian’s way of life, his father, realizing the boy’s white heritage gave him a chance for a future, sent his son back into the white man’s world. Summer of Two Worlds is the story of that summer. In this story, Summer of Two Worlds, the historic context and many of the historic references are real to the time and place of this story. These include but are not limited to place names, the building of the Northern Pacific Railroad, and the historic events that are referenced in the story relating to the Indians. The words spoken in the meeting with Captain Solway in “The Soldier Talk” are blended with actual wording found in letters and documents from I Have Spoken, American History through the Voices of the Indians by Virginia I. Armstrong and a letter from Chief Seattle to the president of the United States. The death of Two Feathers in “Storm Clouds” is based on an actual event described in I Have Spoken. One final note, while Summer of Two Worlds is historic fiction, it is also part of the fictitious stories related to the Virginia and Truckee Railroad with a prequel and a sequel that are totally fictitious. Within the group of four stories that make up the V&TRR collection, these form their own trilogy.

The final piece, Boys of the Civil War, is a research about the real boys of the war found published on line at https://www.essentialcivilwarcurriculum.com/boys-of-the-civil-war.html along with its 7-page source document. In a war in which more than 200,000 participants were underage children and youth, the history of the battlefields and military life of the Civil War is written in the journals and letters of Charles William Bardeen, William Bircher, Elisha Stockwell, Johnnie Wickersham, and other boys. Many of their stories were first shared with the public through newspaper articles recording their exploits. For example, Johnny Clem became an instant hero when he shot a Confederate officer off his horse as the officer tried to capture him. One particular event of the war was notable for the significant number of student cadets who were involved. At the Battle of New Market 250 cadets from the Virginia Military Institute fought as a unit. An exceptional collection of letters, artifacts, and biographical accounts has been gathered in the Archives of the Institute and its Hall of Valor Museum and preserved battlefield park. At the beginning of the 20th century the first collection of biographical information about boys from the war was published and Johnny Clem retired as a Brigadier General after serving thirty-four years in the U.S. Army. As the centenary approached while the vast majority of historians continued to focus on battles, campaigns, and general officers in their research and writing, and more began to be written about the common soldier participants of the war, this was a beginning of a renewed interest in the youngest soldiers. Over the years transitioning from the 20th into the 21st centuries two kinds of writings were published, written by historians from two points of view. Anthologies with photographs, citations, quotations from original diaries and journals were published, bringing to their readers a researched collection of information about the real boys from the war. Other historians researched their subjects, then turned their stories into narrative novel format without citations, designed for younger readers to learn about the war through the eyes of their peers.

The American Civil War from a different perspective