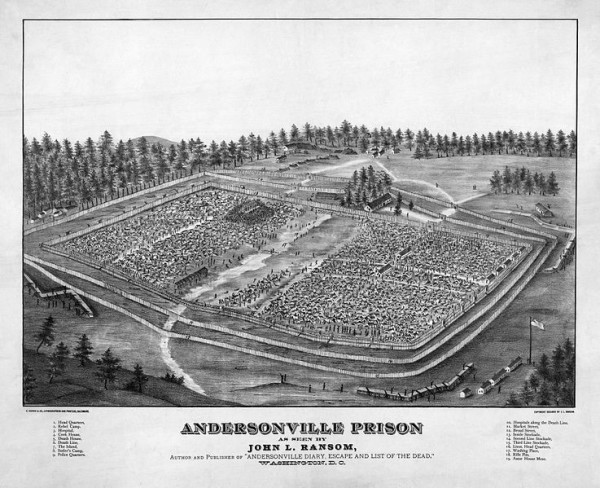 Below are journal entries and letters written by John McElroy, Theodore Upson, and Charles Bardeen, describing their time in the army.

Card playing had sufficed to pass the hours away at first, but our cards soon wore out…. My chum Andrews and I constructed a set of chessmen…. We found a soft white root in the swamp. A boy near us had a tolerably sharp pocket knife for the use of which a couple hours each day we gave a few spoonful of meal. The shapes that we made for pieces and pawns were crude, but sufficiently distinct for identification. We blackened one set with pitch-pine soot, found a piece of plank for a board… and so were fitted out with what served until our release to distract our attention from much of the surrounding misery.

We have been having a Christmas Jubilee. The boys raised some money and I went down into the City to get some stuff. We have a Darky cook, and he said “You alls get the greginces [ingredients] and I will get you alls up a fine dinner sure.” I got some chickens, canned goods, condensed milk and a dozen eggs…. Some of the officers had a banquet – [so] they called it. I don’t know if they had egg nog. If they did, their eggs must have been better than ours, but I know they must have had some sort of nog for the Provost Guard had to help some of them to their Quarters.

My first battle is over and I saw nearly all of it….. Saturday the hardest fighting was done. I saw the Irish Brigade make three charges. They started with full ranks, and I saw them, in less time than it takes to write this, exposed to a galling fire of shot and shell and almost deciminated…. I saw wounded men brought in by the hundred and dead men lying stark on the field, and then I saw our army retreat to the very place they started from, a loss incalculable in men, horses, cannon, small arms, knapsacks, and all the implements of war, and I am discouraged. I came out here sanguine as any one, but I have seen enough, and I am satisfied that we never can whip the South…. Let any one go into the Hospital where I was and see the scenes that I saw….

Some of the boys who joined the war were not so lucky. Below is a letter addressed to the father of a boy name Langdon Leslie Rumph, who died due to diseases at the age of 16.

My dear sir: It is with deep regret that I am compelled to inform you of the death of your son, Langdon… which occurred at the hospital yesterday morning…. He died a brave boy, and although his life was not given up in the tempest of battle, yet, he & his other deceased comrades truly deserve as much glory as those brave Southerners who fell on the bloody field of Manassas. They died in the service of their Country…. Langdon, as I presume you are aware, had been in feeble health for four or five weeks, and had just gotten over a spell of Measles when he was attacked, as his physician said, with Typhoid Fever, but I think it was a relapse from the Measles, and [he] died in five days… I have always thought that the prime causes were… the manner in which we are so crowded at this particular camp.

The History behind Journey Into Darkness