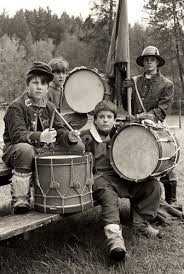 It is often difficult to hear commands with all the noise and confusion in a battle. So in order for commands to reach the soldiers, signals that can cut through the roar of fighting became necessary. That’s how drums became such an important part of warfare with its role in the battlefield communications system. Orders were soon given series of drumbeats to represent them, and the playing of each call would tell soldiers what was required of them.

During the American Civil War, many boys who were too young to become soldiers decided to become drummer boys. Many ran away from home and they would usually lie about their age if they were under 18, or use fake names, so that they could enlist.

Unlike the drummers in today’s modern army, Civil War drummer boys were an integral part of the army. Besides their primary job (beating the drums), drummer boys also acted as stretcher bearers and assistant surgeons. They would walk around the battlefields to look for the wounded, so they can be treated. They also bury the dead.

While drummer boys were not supposed to be involved in actual combat, there were times when they were involved in situations that put their lives in danger. Drummers where generally moved to the rear when fighting begins, however, the battlefield is still a dangerous place even if you are far away from the frontlines. Many drummers died in skirmishes. A stray bullet can easily kill even if they are hiding in the rear.

Some drummers even became famous. John Clem was perhaps the most famous drummer boy during the Civil War. He ran away from home to enlist when he was 9, and he became the youngest boy to fight in the war. People were fascinated by stories of him and he became a celebrity of sorts.

When you think about it, drummer boys are quite possibly the most important members in an army. Can you imagine being a commander in the heat of battle? How would you give orders if your soldiers can’t even hear them? Much is written about the generals and heroes of the Civil War, but little is said about the importance of the drummer boys. Without a drummer to establish communications with, everything would fall apart. The Civil War drummer boys were not mascots. There were actually quite useful and its time people get to know more about them.