William Horsfall was just 14 when he left home with three friends, without money, or a warning to his parents, and stealthily boarded the steamer, Annie Laurie, moored at the Cincinnati Wharf at Newport on the 20th of December 1861. At the last minute, his friends had a change of heart and ran ashore as the steamer prepared to leave port. William stayed hidden until the boat was well under way. When discovered, he said he was an orphan, and was allowed to remain on board. On January 1, 1862, Horsfall enlisted as a drummer boy in Company G, First Regiment Kentucky Volunteers, at Camp Cox [Charleston], West Virginia.

During the Siege of Corinth on May 21, 1862, Horsfall, who then described himself as “an independent sharpshooter,” recounted how a Union captain was wounded in a desperate charge across a ravine and left between the lines. “Lieutenant Hocke said, ‘Horsfall, Captain Williamson is in a serious predicament. Rescue him, if possible.’ so I placed my gun against a tree and, in a stooping run, gained his side and dragged him to the stretcher bearers, who took him to the rear.”

The drummer boy continued to take part in marches with his regiment for the rest of 1862. During the charge at Stones River near Murfreesboro, Tennessee, Horsfall was surrounded by hostile infantry, but Rebels “took pity on his youth,” enabling him “to run for his life,” he wrote. About a year after enlisting, Horsefall became so ill that he had to be hospitalized. Twice in the next three years, he re-enlisted, before receiving a $400 bounty upon his final discharge in 1866.

William Horsfall received his first Medal of Honor “for saving the life of a wounded officer lying between the lines” August 17, 1895. He received a second when the design was changed in 1904.

from information in an article written by reporter Cindy Schroeder 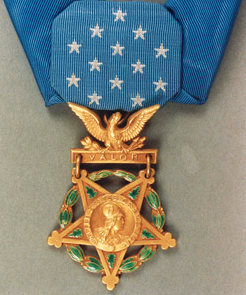 Pictures of the following boys have not yet been found, but each was awarded the Medal of Honor for acts of heroism beyond the call of duty.

John Cook, 15, was bugler for Battery B, 4th U.S. Artillery. During the Battle of Antietam, September 17, 1862, upon returning from running a dispatch, he found the gun crew was down from enemy fire, took over as cannoneer and operated a gun under a terrific fire of the enemy, helping to prevent the enemy from over running his line of defense.

George Hollat, 16, was a first class boy or powder monkey on USS Varuna during an attack on Forts Jackson and St. Phillip in April 1862. He was responsible for running bags of powder from the store room below deck to the gun crew. His citation reads, “He rendered gallant service through the perilous action and remained steadfast and courageous at his battle station despite extremely heavy fire and the ramming of the Varuna by the Rebel ship, Morgan, continuing his efforts until his ship, repeatedly holled and fatally damaged, was beached and sunk.”

William MaGee entered the service at age 15, as drummer for Company C, 33rd New Jersey Infantry. On December 5, 1864, at Murfreesboro, Tennessee, having become acting orderly for General VanCleve, was ordered to charge the enemy with the 181st Ohio. He was among the first to reach a battery of the enemy and, with one or two others, mounted the artillery horses and took two guns into the Union lines.

Julian Scott, 16, was a fifer in the 3rd Vermont Infantry, the same unit as Willie Johnson, the 11-year-old drummer who was awarded the Medal of Honor. During the action at Lee’s Mills, Virginia, April 16, 1862, Julian repeatedly crossed the creek under terrific enemy fire to help rescue wounded soldiers from the battlefield. He was among the first, along with Willie Johnson, to be awarded the Medal of Honor, shortly after it was created by Congress.

Many other young teens were recognized for their gallantry with the Nation’s highest honor. Their stories can be found through on-line searches and in books such as Too Young to Die, Boy Soldiers of the Union Army by Denise M. Keesee and When Johnny Went Marching by G. Clifton Wisler.