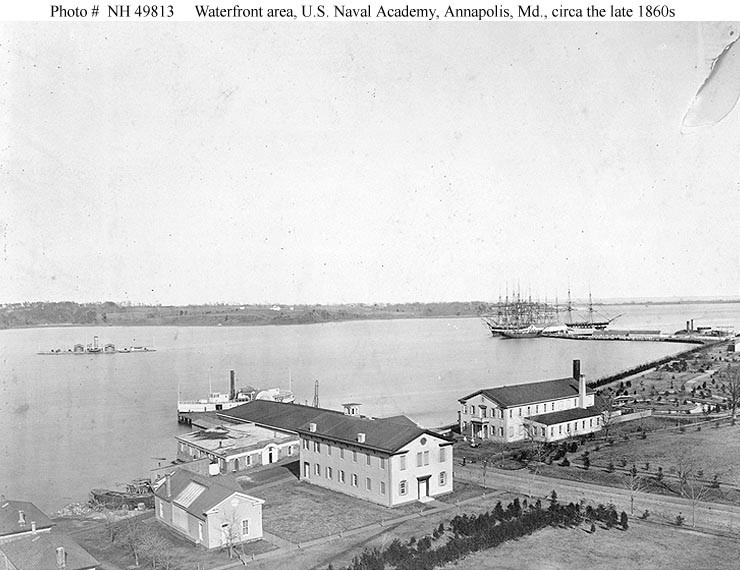 Before the American Civil War, Midshipmen studied for four years at the United States Naval Academy at Annapolis, Maryland. They also trained aboard ships each summer. When the Civil War broke out on April 12, 1861, the United States government made plans to move the Academy since Southern sympathy ran high in Maryland. However, the sudden outbreak of hostilities forced the US government to move the Academy sooner than anticipated. On April 27, 1861, the War Department issued the order: “Fort Adams, Rhode Island, is hereby placed temporarily under control of the Secretary of the Navy, for the purposes of the Naval Academy now at Annapolis, Maryland.” Almost immediately the three upper classes were detached and ordered to sea, and the remaining elements of the Academy were transported to Fort Adams in Newport, Rhode Island by the USS Constitution, where the Academy was set up in temporary facilities and opened in May.

Upon arrival they were welcomed with a 24-gun salute from Fort Adams, and the USS Constitution returned the salute. On board were the Academy commandant, Captain George S. Blake, and some 130 midshipmen. The midshipmen hailed from Maine, New Hampshire, Vermont, Massachusetts, Rhode Island, Connecticut, New York, Pennsylvania, Ohio, Indiana, Illinois, Michigan, Wisconsin, Iowa, Utah, California, Oregon, Kentucky, and the District of Columbia. A few came also from the states in rebellion. Among the officers were Lieutenant Commander C.R.P. Rodgers, a descendant of a Rhode Island family, Lieutenant Edward Simpson, later an admiral, and Lieutenant Stephen B. Luce, later the founder of the Newport Naval Training Station and the Naval War College.

When the war broke out 24% of the US Navy’s officers resigned and joined the Confederate States Navy, including 95 graduates and 59 midshipmen, as well as many key leaders involved with the founding and establishment of USNA:

By the end of the war, 400 graduates served in the Union Navy, 95 in the Confederate Navy. 23 graduates were killed in battle or died of wounds.

On August 9, 1865, the Academy returned to Annapolis after four years in Newport.