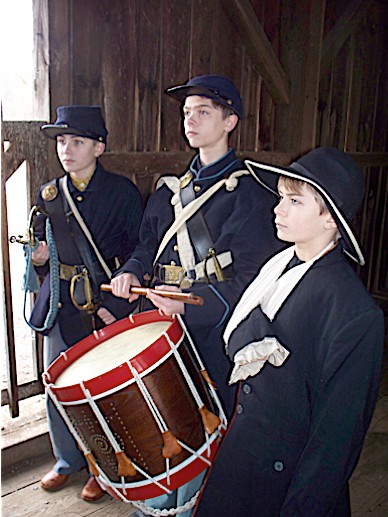 three boys from the book, Blake’s Story Revenge and Forgiveness

More than 200,000 under-aged boys, 17 years old and younger and some as young as nine, served in the armies of the Union and the Confederacy. With the approach of war in 1861, there was an air of excitement and adventure in the expectant assuredly that war was inevitable. Boys as young as six signed up in their local home guard units and as young as seven in local companies organized in the expectation of being called out to fight the enemy. Prevailing attitudes and opinions of the time accepted boys within the ranks. Regulations over the years required soldiers to be at least eighteen years old, no younger than seventeen with written parental permission, must pass a physical examination and be at least five foot three inches tall. Musicians could be as young as twelve, were to pass a physical examination, but were excused from the height requirement. Nevertheless, many young teens were accepted by mean of their own lies, by recruiters who looked the other way, when accompanied by other family members, or presented themselves as orphans. The very young tended to be valets or servant to commissioned fathers, mascots, some musicians, and some who took the names of older family members or friends. Some enlisted in another community where they were not known and less likely to be questioned. And some declined pay and did not sign muster books so there was no record to check. Finally, an unusual group of unassigned youth within the Confederate army was the drillmasters borrowed temporarily from Southern military schools to assist in the training of new recruits. Cadets thirteen years old and up were fully respected by older men as they drilled and trained them upon their entrance into the army. Perhaps the youngest instructor to enter service in the Confederate army this way was eleven-year-old Charles Carter Hay.

The boys served in a large number of capacities. Many were common soldiers, some were teamsters, members of the medical corps, markers on which troop lines formed, and many were musicians. At the time of the Civil War, musicians were critical to the operation of the army, both in camp and on the battlefield. Drummers and buglers had about thirty-six calls to execute. In camp their calls began with reveille, went on to assembly, meal call, sick call, to the colors, ending the day with tattoo and taps. On the battlefield, they signaled maneuvers on order from commanding officers, telling troops when to increase the pace to charge to retreat to change formation. Fifers provided music for the march along with the drummers’ cadence. Drummers and buglers often found themselves in the midst of battle while fifers were usually assigned to the medical corps. In camp they might serve as messengers, orderlies, barbers, stable hands, cook’s assistance. Some had extra side jobs such as selling delicacies to the troops or cleaning equipment.

In the weeks that follow you will read the stories of eight young boys, cavalry and infantry along with two who were recognized with the Medal of Honor.

For more information about hundreds of additional boys, Union and Confederate, go to the bibliography that accompanied the third week’s post in this series. 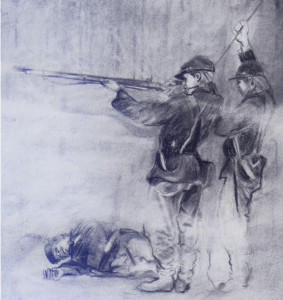