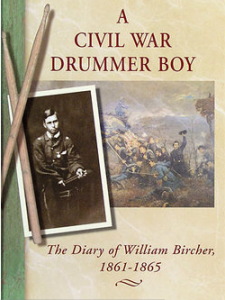 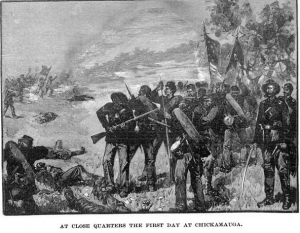 William Bircher lived in Minnesota when fighting began in the civil war. Like most 15 year-old boys William was excited by this war business. William wanted to become a solider and help the union army defeat the confederacy. At first he was rejected by the union army because he was too young. Fortunately “company K” of the Minnesota regiment needed a drummer. Bircher was allowed to join the union forces, as a drummer boy.

In “A Drummer Boy’s Diary: Comprising Four Years of Service with the Second Regiment Minnesota Veteran Volunteers, 1861-1865, drummer boy William Bircher recounts his observations and experiences at the commencement of the Battle of Chickamauga. Bircher writes:

September 19th: Hot and dusty. At daybreak, as we marched along, we saw troops falling into line on the right of the road; the artillery was unlimbered, the gunners stood to their guns, and every thing had the appearance of a battle. We marched along the rear of the line until we reached the left wing of the army, where we piled up our knapsacks, formed in line, marched to the front, and deployed skirmishers. We advanced but a short distance in the woods, which was a pine forest, before we came upon the rebel skirmish-line. We heard on our right the heavy roll of musketry and the terrible thunder of the artillery, and it came nearer and nearer, until, in less time than it takes to describe it, we were engaged with Bragg’s army. The terrible carnage continued at intervals all day. Hide.

At night we heard, from all over the field, the cry of the wounded for water and help, and the ambulance corps were doing all in their power to bring all the wounded into our lines. The night was cool, with a heavy frost, and the water was very scarce. We lay on our arms all night, and on Sunday, the 20th, the battle was renewed with terrible slaughter on both sides. Towards noon we heard that Chittenden’s and McCook’s corps, on our right, had been driven back, and all that was left on the field, to hold in check the entire rebel army, was our corps,—Thomas’s Fourteenth. We held the enemy back until evening, in spite of his desperate assaults, and after dark we retired to Rossville. Here General Thomas posted Negley’s right, stretching to the Dry Valley Road, Brannan’s (our) division in reserve to Reynolds’s right and rear, while McCook’s corps extended from Dry Valley nearly to Chattanooga Creek. Bragg’s army was too tired and too sadly worsted to attempt to follow on the night of the 20th. Oh the 21st a few straggling shots were directed against our army at Rossville. Thomas felt that he could not hold his position there against the Confederate army. Orders were received at 6 P.m. on the 21st, and by seven o’clock the next morning our army was withdrawn, without opposition from the enemy. This ended the battle of Chickamauga. Though retiring from the field, our army had succeeded in shutting the rebels out of Chattanooga.

Again we sat down beside [the campfire] for supper. It consisted of hard pilot-bread, raw pork and coffee. The coffee you probably would not recognize in New York. Boiled in an open kettle, and about the color of a brownstone front, it was nevertheless…the only warm thing we had. The pork was frozen, and the water in the canteens solid ice, so we had to hold them over the fire when we wanted a drink. No one had plates or spoons, knives or forks, cups or saucers. We cut off the frozen pork with our pocket knives, and one tin cup from which each took a drink in turn, served the coffee.

Civil War: The Impact of Family Situations on Enlistment