THE DRUMMER BOY OF SHILOH 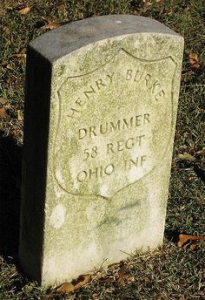 Among the many who fell on the Federal side was little Henry Burke, the 13-year-old drummer boy, who was among those who perished in the fighting in “the Hornets Nest.” Some soldier who, perhaps, viewed the dying scene of this brave boy, penned the following lines shortly after the battle, entitled The Drummer Boy of Shiloh. 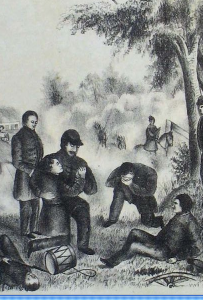 The Drummer Boy of Shiloh

On Shiloh’s dark and bloody ground
the dead and wounded lay,
Amongst them was a drummer boy
that beat the drum that day;

A wounded soldier raised him up —
his drum was by his side –
He clasped his hands, and raised his eyes,
and prayed before he died.

“Look down upon the battlefield,
O Thou our heavenly Friend,
Have mercy on our sinful souls” —
the soldiers cried, “Amen!”

For gathered ’round, a little group,
each brave man knelt and cried –
They listened to the drummer boy
who prayed before he died.

“Oh, Mother,” said the dying boy,
“Look down from Heaven on me!
Receive me to thy fond embrace!
Oh, take me home to thee!

“I’ve loved my country as my God,
to serve them both I’ve tried,”
He smiled, shook hands, death seized the boy
who prayed before he died.

Each soldier wept then like a child —
stout hearts were they, and brave;
The flag, it was his winding sheet –
they laid him in his grave.

One wrote upon a simple board
these words, “This is a guide,
To those who mourn the drummer boy
who prayed before he died.”

Angels round the throne of grace,
look down upon the brave,
Who fought and died on Shiloh’s plain
now slumb’ring in the grave.