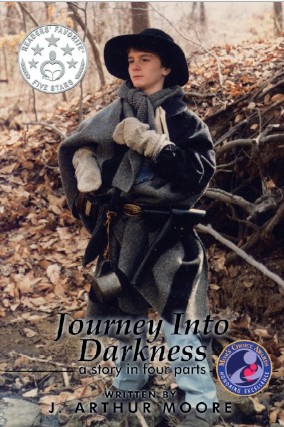 Journey Into Darkness takes place during the American Civil War from 1861 to 1864. It is the story of Duane Kinkade’s journey through the war in search of his father. The war is very real and the events of the war as seen through Duane’s story are very real. The central event in the first book of the series was the raid on the Kinkade farm. Raiders from the north were active throughout western Missouri, Arkansas, and the nearby Indian Territories. Mail was also an issue when Duane’s letters to his pa were lost in transit. The Confederacy had its own Post Office Department established in February 1861. Not all mail crossing into northern territory and going from civilian to military carrier made it while mail sent by soldiers was generally more secure and safe in its passage. Descriptions of Duane’s journey by riverboat were taken in part from period maps and Life on the Mississippi by Mark Twain.

Throughout the series, information about the weather during historic events was taken from soldiers’ diaries as well as the researched information gathered about the events. The rain prior to Shiloh, the day after Gettysburg, at Spotsylvania Court House did happen. The freezing conditions at Stones River and the 90 degree drought at Perryville are all part of history. Each battle in which Duane finds himself is described from the point of action of the soldier on the ground at given points within the event. There is no overview of troop movements or the actions of generals. The regiments, their officers, their participation are all according to history by way of research. Duane entered Shiloh with Bowen’s brigade and was in the fighting opposing the Hornet’s Nest. With Sheridan at Perryville, he experienced the opening of the conflict along Doctor’s Creek during the wee hours after midnight. At Stones River, again with Sheridan, he witnessed the piles of dead frozen together in their own blood and gore as temperatures fell below freezing and drizzle and rain fell during the battle.

With General Archer’s regiment at Chancellorsville, Duane was assigned courier duty assigned to General Hill’s staff. His view of that battle varied according to his assignment. At Gettysburg the boy was once again on the battle line in Archer’s brigade entering the town on the first day with A.P. Hill’s division and in combat at McPherson’s farm. He entered the woods with a North Carolina regiment witnessing the slaughter of that first afternoon; then found himself under Colonel Fry attacking the Union center on the third day. In the Wilderness Campaign with General Birney’s division, Duane witnessed the battle from the breastworks on Brock Road where the battlefield went up in flames which engulfed the wooden works, through which the enemy attacked and was driven back. He was at the Bloody Angle in the pouring rain during Spotsylvania Court House and the opening assault at Cold Harbor where three thousand fell in fifteen minutes and the dead lay in the hot sun for three days because neither general would call a truce.

The history isn’t limited to the battles. The description of an incident wherein the pickets from both armies shared a cabin and kept a fire going, one side during the day and the other at night, was based on recorded fact. Battlefield incidents where the bands from both armies played in exchange did happen. The execution of two deserters as described in the fourth book, did happen. Those who read Journey Into Darkness will not only share the journey with Duane, but also experience the history of the war as it actually happened.