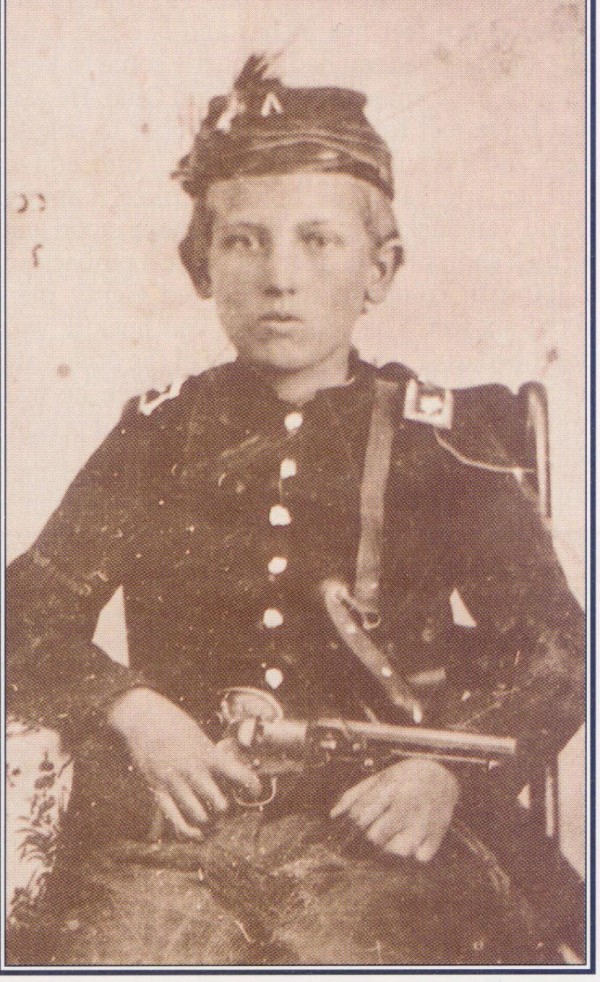 David Wood was 10 years old when the war broke out. His father, Samuel, had moved the family from Ohio to Kansas in 1854 to help “Free Staters” keep slavery out of the territory. The elder Wood forged a reputation as the “Fighting Quaker.” Growing up surrounded by hostility, it was natural for David to feel ready to march off with the troops when his father became lieutenant colonel of the 6th  Missouri Cavalry in 1861.

Wood’s battalion was stationed at Rolla, from where it operated against Confederates in southern Missouri and Arkansas. At Rolla, David repeatedly begged his father to let him go along, but always was denied permission. One day while Colonel Wood was leading his men on a long march, miles from headquarters, he noticed a commotion at the column’s rear. Turning his white stallion, he road through the ranks, all the while ignoring distractions his men contrived to divert his attention elsewhere. At last he made his way to the rear where David was found riding on a pony, surrounded by a group of admiring soldiers who were using their mounts to conceal the lad. David continued the story:

“He didn’t say much to me. I guess he realized he might as well yield to the inevitable. From then on he kept me with him, and on January 1, 1862, at Rolla, I was regularly enlisted. My duties were principally that of an orderly, carrying dispatches here and there and sometimes going where grown men could not go.”

In June 1862, he displayed budding business acumen: “I secured a cask of fresh water and some lemon extract and started making lemonade and selling it to the soldiers. The venture was so profitable that I made enough to buy some real lemons for a second batch. From this beginning I developed a sutler’s outfit that made me in the neighborhood of $2,000 while I was in the army. Finding there was a great demand for small delicacies, I loaded up with everything I could think of that the men would buy. One of the generals from the main army loaned me an ambulance for the outfit, and soon I was handling quite a business. Among other things, I changed bills for the men, who allowed me 25 cents for changing a 5- or 10-dollar bill. This was robbery, of course, but was allowed throughout the army until Lincoln printed small bills called ‘shin plasters’ for change.” 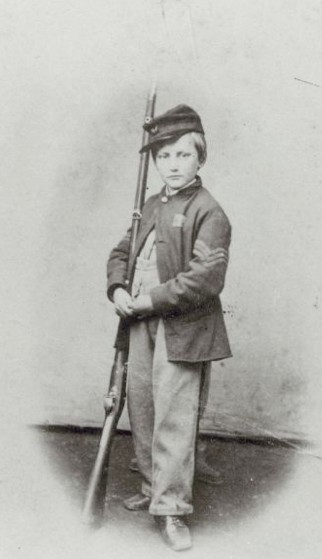 Johnny Clem’s story appears in many collections including When Johnny Went Marching  by G Clifton Wisler, and in Too Young to Die by Dennis M. Keesee; as well as a number of on line locations searching “Civil War drummer boys” images and other key words. His is probably one of the most written about biographies of young boys from the Civil War.

John Joseph Klem was born August 13, 1851. He and his younger siblings sold produce from their parents’ small farm, carrying it in a wagon. His mother was killed crossing the railroad tracks, and when John’s father remarried, John did not get along with his stepmother. Problems with his stepmother made life at home unpleasant.

Johnny began cutting classes so he could drill as a drummer boy with a local unit– Company H, 3rd Ohio Volunteer Infantry. Many of John’s relatives had enlisted in the army, and he felt such admiration for the president that he changed his middle name to Lincoln. Recruiters turned him down because of his age.

Eventually Johnny ran away from home to join the army in May 1861, though he was only 9-years old. He finally got far enough away from home that they let him stay. When he offered his services as drummer to a company commander of the Third Ohio Volunteer Regiment, the captain looked him over, laughed and, according to Clem, ‘said he wasn’t enlisting infants.’ Johnny then tried to join the Twenty-second Michigan Regiment and was refused. But he ‘went along with the regiment just the same as a drummer boy, and though not on the muster roll, drew a soldier’s pay of thirteen dollars a month, which was contributed by officers of the regiment.”

In his Historical Collections of Ohio, Henry Howe tells us the story of young Johnny Clem. As part of his research, Howe was able to interview Clem’s family in Newark, Ohio. Lizzie Clem, who was 7 years old when her older brother left home for the Army recalls the following events from the day prior to Johnny’s departure:

It being Sunday, May 24, 1861, and the great rebellion in progress. Johnny said at dinner table: “Father, I’d like mighty well to be a drummer boy. Can’t I go into the Union Army?” “Tut, what nonsense, boy! You are not ten years old.” Yet when he had disappeared it is strange we had no thoughts that he had gone into the service.

When dinner was over Johnny took charge of us, I being seven years old and our brother, Lewis, five years, and we started for the Francis de Sales Sunday-school. As it was early, he left us at the church door, saying, “I will go and take a swim and be back in time.” He was a fine swimmer. That was the last we saw of him for two years.

The distress of our father and step-mother at Johnny’s disappearance was beyond measure. Father, thinking Johnny must have been drowned, had the water drawn from the head of the canal. Mother traveled hither and yon to find him. It was all in vain. Several weeks elapsed when we heard of him as having been in Mount Vernon; and then for two years nothing more was heard and we mourned him as dead, not even dreaming that he could be in the army, he was so very small, nothing but a child.

The 4-foot-tall youngster made himself indispensable around camp and the following spring was officially mustered into the regiment as a musician. Intelligent despite his limited education, Clem was given the important duty of regimental marker, carrying the guide on which a unit formed its line.

A few months later, the 22nd Michigan was heavily engaged at the Battle of Chickamauga. On Sept. 20, 1863, in the midst of a retreat, Clem found himself face to face with a Rebel colonel on horseback. As the story goes, the officer yelled, “Stop, you little Yankee devil!” Clem refused to surrender. As he later described it, he picked up a discarded rifle, pointed it at the officer — and to both combatants’ great surprise, shot him out of the saddle.

It evolved that the colonel wasn’t killed. But the boy did evade capture by rolling himself in a blanket before finally making it back to his decimated regiment. Word of the exploits of 12-year- old Clem spread quickly among the demoralized troops.

The youngster’s admirers in the press and the army didn’t quibble over all the details of his heroism. Before he knew it, “The Drummer Boy of Chickamauga” was a celebrity, written up in national publications, posing for photographs, and accepting the gift of a pony. According to some sources, the song, “When Johnny Comes Marching Home Again,” was based on Clem, who was promoted to sergeant. Countless youths were motivated by his example.

In October 1863, Johnny was captured in Georgia by Confederate cavalry while detailed as a train guard. The Confederate soldiers took his uniform away from him, which reportedly upset him terribly–especially his cap which he said had three bullet holes in it. He was exchanged a short time later, but the Confederate newspapers used his age and celebrity status to show “what sore straits the Yankees are driven, when they have to send their babies out to fight us.”

Clem didn’t quite approach “great man” status as he grew older, but he was able to seize advantage of the connections fame had brought him. After his skimpy education torpedoed his attempt to enter West Point, he prevailed upon President Ulysses S. Grant to appoint him a second lieutenant in the Regular army. Clem served from 1871 to 1916, when he retired as a mildly competent but beloved major general. He was the last Civil War veteran to leave active duty. He died at his Texas home on May 13, 1937, and was buried at Arlington National Cemetery. His gravestone at Arlington reads, “The Drummer Boy of Chickamauga.”

Wiley, Bell Irvin. The Life of Billy Yank: The Common Soldier of the Union (Louisiana State University Press, 1952. (The edition quoted here is the 1978 reissue.)

Boy Soldiers of the Civil War

The American Civil War from a Different Perspective Part 1