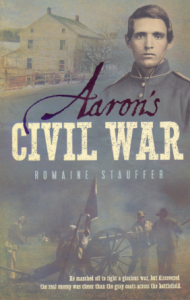 Aaron’s story told by a descendant 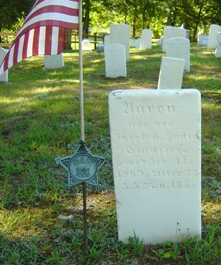 Aaron Stauffer  [1847-1869] enlisted in 1864 at age 17, trained in Harrisburg, assigned to infantry, wounded at Cold Harbor, while in hospital contracted tuberculosis, died at age 22 of  this illness contracted during the war, buried in the Pike/Stauffer cemetery in Snyder County, his grave marked with a Union Army flag holder shaped like a star marked GAR for the Grand Army of the Republic [Mennonite]

Valentine (Felty) Rissler  [1844-1898] enlisted at age 19, assigned to cavalry with his friend, John Seibel, deserted at Cold Harbor after John was wounded, taking John’s carbine with him, survived the war, buried at the Mount Zion United Methodist Church of Narvon in Lancaster County [Methodist]

Daniel Brubaker, true identity unknown; oral tradition and other military records suggest he was the son of Daniel B. Brubaker or an unnamed member of the Jacob Brubaker family or David B. Garver of Juniata County

John Seibel  [1847-1864] enlisted at age 16, assigned to cavalry with his friend Valentine Rissler, wounded at Cold Harbor at age 17, taken to a hospital in Washington where he later died, among the first to be buried in Arlington National Cemetery, his gun was brought back from the war by Felty who deserted at Cold Harbor and it is still in the family[Mennonite]

source: Aaron’s Civil War by Romaine Stauffer, and chapter 13 of Faith, Hope, and Love by Gary Good with war records/documents in the appendix 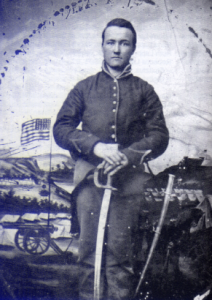 Michael Garver [1843-1916] first enlisted at age 18, second enlistment the following year, reenlisted a third time in 1864 with his brother David, mustered out in 1865 keeping his saber and Spenser Carbine, an extensive war record exists, following the war became a medical doctor in Ephrata, buried in Bowman Cemetery  [father-Amish, mother-Mennonite]

source: The Garvers of Ephrate by Steve Garver, and articles by Gary Good