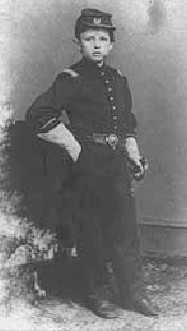 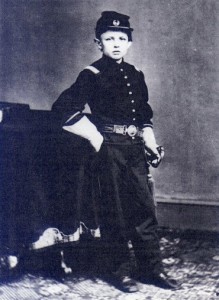 This image on the left appears in an on-line search of Civil War drummer boys with text telling about young boys who served in the war. It does not identify the boy and suggests that he is unknown. However, he is known.

This photographic image from which the first image was taken, appears in Too Young To Die, Boy Soldiers of the Union Army, by Dennis M. Keesee. Mr. Keesee relates how the Secretary of War, for the fun or it, commissioned him a lieutenant. This twelve-year-old then went back to his house, dismissed the military guards, then mustered the household staff, issued them weapons, drilled them, and put them on duty. His older brother, Robert, was upset by this and went to their father. Father found it amusing and did nothing about it. The boy? Tad Lincoln. His father? The President. The author goes on to share several events. President Lincoln, his son Tad, General Grant, and his son Jesse rode out to the fort at City Point, outside Washington. Jesse’s horse took off, then was chased down by Lincoln, Grant, and an orderly. After arriving, the party came under Confederate artillery fire and had to wait it out in a bombproof shelter. On another occasion, riding his pony with a cavalry boy escort, William W. Sweisfort, Tad accompanied his parents to a troop review of the 150th Pennsylvania. Sweisfort tells of his experience describing “a lively boy” who “kept me moving.” On a presidential visit at Belle Plain, Tad spied General Sickles’ orderly and bugler, 12-year-old Gustav Schurmann. Borrowing a cavalryman’s horse, he rode over and hung out with Gus. When the review was over, he begged that he go home with them to the White House. The president explained that he was a soldier and could not leave his command. The general stepped in and granted a furlough, releasing Gus to accompany the presidential party.

Read more about these events and others and about more boy soldiers in Too Young To Die, Boy Soldiers of the Union Army.

Gustav’s story also appears in Too Young to Die, by Dennis Keesee. There is also a biography written by William Styple, The Little Bugler. Born in Westphalia, Prussia, in 1849, Gus was 11 years old when he first enlisted in the 40th New York Volunteers. Rejected at first because he was too small, his father spoke to the commanding officer, and Gustav was given a drum and told to play. The colonel said he would do. He was with the regiment from their first engagement at the Battle of Williamsburg, until they went to Harrison’s Landing. There he was asked to serve General Kearny as an orderly for a day since General McClellan was to review the army.

Reporting the next day, General Kearny provided him with a horse. During the course of the review, the general had occasion to jump a large ditch. Gustav followed along, but most of the staff did not. That evening, after the review, when he reported to take his leave and return to his regiment, Gustav was told to go get his gear and bring it to headquarters and consider himself the general’s orderly in the future. He also became the general’s principal bugler. Kearny was killed August 31, 1862 at the Battle of Ox Hill. General David Birney replaced Kearny and kept Gustav as his bugler and orderly. Following Antietam, he was appointed to General George Stoneman’s Third Corps staff and promoted to Corps bugler.

Following the Battle of Fredericksburg in December, Birney was replaced by General Daniel Sickles, who in turn promoted Gustav to sergeant, owing to his gallant service. During the grand review of the Army of the Potomac, April 9, 1863, President Lincoln noticed Gustav riding beside the general. The president’s son, Tad, also noticed Gustav. The two met and an invitation to the White House followed. Gustav received an extended furlough and spent many happy days with Tad.

The Battle of Chancellorsville followed in which General Sickles was nearly cut off and captured. A daring plan, which commenced at the sound of Gustav’s bugle, resulted in a successful fight to return to the main army. Following the Federal defeat and in order to rebuild spirit, a medal was created in honor of Kearney, the “Kearny Cross of Honor,” and presented to five hundred select men for bravery and good conduct. Gustav was a recipient; it was a proud moment.

Nearly two months later, the army was headed to Gettysburg where General Lee’s army was engaged in battle. General Sickle’s corps advanced to a place in front of the Union line on the afternoon of July 2nd and came under a fierce attack near a farmhouse. The general was struck below the knee by a cannon ball and Gus placed a tourniquet on the leg. He went with the general to the hospital and then, back to Washington. President Lincoln visited them, telling of the victory at Gettysburg. The president ended Gus’s military career and sent him home to his family to attend school and prepare to enter West Point. But all prospects of West Point ended with Lincoln’s death. Gustav attended the funeral when the train passed through New York City, then went on with life after the war. He never saw Tad again.

The following passage was written by Gustav A. Schurmann, subject of the book The Little Bugler by William Styple. Schurmann served under General Kearny as an orderly and boy bugler during the Peninsular Campaign in the summer of 1862. In his adulthood, Schurmann wrote a bit about his war-time experiences. Looking back upon his days as a soldier with the 40th New York Mozart Regiment, Schurmann reminisces on personal incidences relating to his association with the general:

I will try and detail, in the smallest possible compass, as far back as I can recollect, my experience with General Kearny. In the first place, I will begin with my enlistment. In the early part of 1861, I was drumming recruits in Chatham Square, New York City, for the Forty-second Regiment Volunteers (Tammany), for a couple of months, when my father enlisted in the Fortieth N.Y. Volunteers (Mozart) at Yonkers. With the Forty-second not treating me well, I left them, not being mustered in, and tried to join the Fortieth. But its commander, Colonel Riley, would not take me on the account of my being too small and also too young, being only eleven years old. As soon as Colonel Riley said “no” I began to cry, and turned away from the tent, but my father went and spoke to him. Then he called me back and made me take a drum and a beat. All the men commenced to laugh because the drum was nearly as big as myself, but nevertheless the colonel said I would do.

I was with the regiment from the Battle of Williamsburg, our first fight, until we went to Harrison’s Landing. Corporal Brown, a clerk at General Kearny’s headquarters and also a member of our regiment, came to me one day stating that General Kearny ordered him to get him a drummer from our regiment to serve as an orderly for one day, as General McClellan was to review the army the next day. I reported myself the next morning early. The general received me kindly and gave me his gray horse (Baby), one that he brought from Mexico. During the review, the general had occasion to jump a very large ditch. I jumped it with him, but a great many of the officers had to cross further up. I think my jumping this ditch brought me favorably to his notice. Accordingly, when I reported myself in the evening after the review, so as to return to my regiment, he said, “No, but go and bring your baggage over to headquarters and consider yourself my orderly in the future.”

From that day until his death I was always with the general. It was his habit to ride outside of the picket-guard every day at Harrison’s Landing, only taking me with him. Many a time I would have to ride on top of the horse, lengthwise, so as not to knock my legs against the trees. He would go so fast through them, one time my hat was knocked off. As the general never stopped, by the time I was in the saddle again there was no general to be seen. But I gave “Baby” his own way and in less than five minutes he brought me up to him. I have known that same horse to kick at him as he went in the gate. The general would then “damn” me for not holding the horse tight, but for all that the general always treated me the same as my own father would have done, and no one mourned his untimely death more than I did.

Gustav Schurmann reminisces on his friendship with Tad Lincoln

“As I look back I can see that I must have been an object of envy to Tad, as by that time I had become quite a horseman, could blow a bugle, beat a drum, and swagger about like the bigger ones. The men, with whom I was somewhat of a favorite, had presented me with a mustang that had formerly been ridden by Mosby, the guerrilla chieftain, and on him I cavorted about the field until Tad could stand it no longer, and persuaded a cavalryman to lend him his horse to ride. Finally the President and Mrs. Lincoln being ready to return to Washington called Tad and bade him take leave of me.

“Mother,” says Tad, I won’t go home unless ‘Gus’ (as he already called me) can go along.” “Oh, no,” interposed the president, “that won’t do. This lad is a soldier, and must remain here and attend to his duties.”

“I don’t care, pop,” responded Tad. “I want him to go home with me and teach me to ride and blow the bugle.”

This appeal, and the tears which suffused his eyes, was too much for the tender heart of our president, who ever loved Tad as the apple of his eye, and to relieve the great and good man from embarrassment General [Sickles] said: “Mr. President, if you desire, the bugler may accompany you. I will give him a furlough.”

Tad, greatly overjoyed, thanked the general, while I returned to my tent and secured my knapsack. I rode to Washington in the president’s carriage, and that night slept serenely in the guests’ chamber at the White House. Tad slept in a crib alongside his parents’ bed. The contrast of my new quarters with my humble and sometimes uncomfortable lodgings of the past year was so overwhelming that even now the thought of the beautiful chamber that I occupied awes me.

Tad was a generous-hearted, sweet-tempered lad, with an adventurous and inventive turn of mind. I well remember one Sunday afternoon when the rain kept us in doors, that Tad’s budding genius took a particularly distinctive turn, when with his little hatchet – perhaps the same one used by George Washington – he hacked at various pieces of furniture, and finally sawed away the banisters of the main stairway. When this was reported to the president, he called Tad and myself into his room and entertained us with a story about the Black Hawk war, and showed us the sword he carried in that campaign of a company of volunteers. He did not allude to our vandalism.

Tad and I owned Washington for several weeks, doing pretty much as we pleased.”