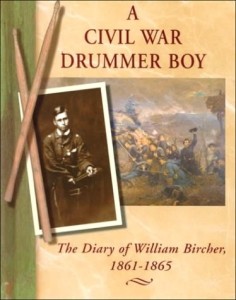 Below is a letter written by William Bircher, a fifteen year old boy who joined the army with his father.

The happiest day of my life was when I put on my blue uniform for the first time and received my drum.

During the months of August and September, we did post duty at Fort Snelling and drilled a great deal. In October we received orders to proceed to Washington to join the army on the Potomac. October 14, we embarked on steamboats and proceeded down the river to St. Paul, where… we marched through the city. Here we found the streets crowded with people waving their handkerchiefs. The band played, the flag waived, and the boys cheered back… As we marched down the river, the sidewalks everywhere were crowded with… boy who wore red, white and blue neckties and fatigue caps [and] with girls who carried flags and flowers…. Drawn up in line there was scarcely a man, woman, or child in the great crowd around us but had to pass up for a last good-bye and last “God bless you, boys!” And so amid cheering and handshaking and flag-waving, the steamboat came floating down the stream, and we were off, with the band playing the “Star-Spangled Banner.”

How firmly some had grasped their guns, with high, defiant look, and how calm were the countenances of others in their last solemn sleep. I sickened of the dreadful sight…. It was too awful to look at any more. Even the rudest and roughest of us were forced to think of… the sorrow and tears that would be shed among the mountains of the North and the rice-fields of the far-off South.

We lost poor Henry Simmers, the drummer of Company G during the night. The poor fellow, being unable to keep up, lay down somewhere along the road, and was captured by the cavalry that was following us. I took his blanket and drum to relieve him, but he was too fatigued to follow, saying, “Oh, let me rest. Let me sleep a short time. Then I will follow on.” I tried to keep him under my eye, but he finally eluded me, and when we again stopped for a short rest he was not to be found…. I pitied the poor fellow. I was afraid he would never live to return home.

I came to a very fine plantation, where the white folks had all run off, leaving nobody at home, but an old negro couple. I was the first Union soldier they had seen. After I told them that they were now free and could go where they wished, and that I was one of “Massa Lincum’s” soldiers, their joy knew no bounds. Nothing was too good for me…. The old darky proceeded to the garden and dug about a peck of yams, and the old lady went to the barn and got me about two dozen eggs. She also gave me a piece of bacon.

It was hard to be homeless at this merry season when folks up North were having such happy times. But it was wonderful how elastic the spirits of our soldiers were, and how jolly they could be under the most adverse circumstances…. We began to drop off to sleep, some rolling themselves up in their blankets and overcoats and lying down, Indian fashion, feet to the fire, while others crept off to their cold shelter tents under the snow-laden pine trees for what poor rest they could find… wishing each other a “Merry Christmas.”

The History behind Blake’s Story