A story from the US Civil War

A few days before our regiment received orders to join General Lyon, on his march to Wilson’s Creek, the drummer of our company was taken sick and conveyed to the hospital, and on the evening preceding the day that we were to march, a negro was arrested within the lines of the camp, and brought before our captain, who asked him “what business he had within the lines?” He replied, “I know a drummer that you would like to enlist in your company, and I have come to tell you of it.” He was immediately requested to inform the drummer that if he would enlist for our short term of service, he would be allowed extra pay, and to do this, he must be on the ground early in the morning. The negro was then passed beyond the guard.

On the following morning there appeared before the captain’s quarters during the beating of the reveille, a good looking, middle aged woman, dressed in deep mourning, leading by the hand a sharp, sprightly looking boy, apparently about twelve or thirteen years of age. Her story was soon told. She was from East Tennessee, where her husband had been killed by the Rebels, and all their property destroyed. She had come to St Louis in search of her sister, but not finding her, and being destitute of money, she thought if she could procure a situation for her boy as a drummer for the short time that we had to remain in the service, she could find employment for herself, and perhaps find her sister by the time we were discharged.

During the rehearsal of her story the little fellow kept his eyes intently fixed upon the countenance of the captain, who was about to express a determination not to take so small a boy, when he spoke out, “Don’t be afraid, captain, I can drum.” This was spoken with so much confidence, that the captain immediately observed, with a smile, “Well, well, sergeant, bring the drum, and order our fifer to come forward.” In a few moments the drum was produced, and our fifer, a tall, round shouldered, good natured fellow, from the Dubuque mines, who stood, when erect, something over six feet in height, soon made his appearance.

Upon being introduced to his new comrade, he stooped down, with his hands resting upon his knees, that were thrown forward into an acute angle, and after peering into the little fellow’s face a moment, he observed, “My little man, can you drum V”

“Yes, sir,” he replied, “I drummed for Captain Hill in Tennessee.”

Our fifer immediately commenced straightening himself upward until all the angles in his person had disappeared, when he placed his fife at his mouth, and played the “Flowers of Edenborough,” one of the most difficult things to follow with the drum that could have been selected, and nobly did the little fellow follow him, showing himself to be a master of the drum.

When the music ceased, our captain turned to the mother and observed, “Madam, I will take your boy. What is his name?”

“Edward Lee,” she replied, then placing her hand upon the captain’s arm, she continued, “Captain, if he is not killed ” — here her maternal feelings overcame her utterance, and she bent down over her boy and kissed him upon the forehead. As she arose, she observed, “Captain, you will bring him back with you, won’t you?”

“Yes, yes,” he replied, “we will be certain to bring him back with us. We shall be discharged in six weeks.”

In an hour after, our company led the Iowa First out of camp, our drum and fife playing “The girl I left behind me.” Eddie, as we called him, soon became a great favorite with all the men in the company. When any of the boys had returned from a horticultural excursion, Eddie’s share of the peaches and melons was the first apportioned out. During our heavy and fatiguing march from Rolla to Springfield, it was often amusing to see our long legged fifer wading through the mud with our little drummer mounted upon his back, and always in that position when fording streams. 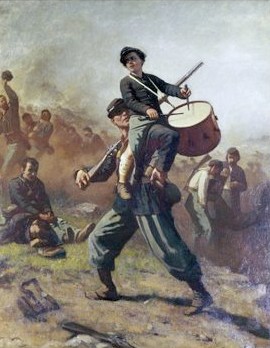 During the fight at Wilson’s Creek, I was stationed with a part of our company on the right of Totten’s battery, while the balance of our company, with a part of the Illinois regiment, was ordered down into a deep ravine upon our left, in which it was known a portion of the enemy was concealed, with whom they were soon engaged. The contest in the ravine continuing some time, Totten suddenly wheeled his battery upon the enemy in that quarter, when they soon retreated to the high ground behind their lines. In less than twenty minutes after, Totten had driven the enemy from the ravine, the word passed from man to man throughout the army, “Lyon is killed!” and soon after, hostilities having ceased upon both sides, the order came for our main force to fall back upon Springfield, while a part of the Iowa First and two companies of the Missouri regiment were to camp upon the ground and cover the retreat next morning.

That night I was detailed for guard duty, my turn of guard closing with the morning call. When I went out with the officer as a relief, I found that my post was upon a high eminence that overlooked the deep ravine in which our men had engaged the enemy, until Totten’s battery came to their assistance.

It was a dreary, lonesome beat. The moon had gone down in the early part of the night, while the stars twinkled dimly through a hazy atmosphere, lighting up imperfectly the surrounding objects. Occasionally I would place my ear near the ground and listen for the sound of footsteps, but all was silent save the far off howling of the wolf, that seemed to scent upon the evening air the banquet that we had been preparing for him.

The hours passed slowly away, when at length the morning light began to streak along the eastern sky, making surrounding objects more plainly visible. Presently I heard a drum beat up the morning call. At first I thought it came from the camp of the enemy across the creek, but as I listened, I found that it came up from the deep ravine; for a few minutes it was silent, and then as it became more light I heard it again. I listened — the sound of the drum was familiar to me — and I knew that it was our drummer boy from Tennessee beating for help the reveille.

I was about to desert my post to go to his assistance, when I discovered the officer of the guard approaching with two men. We all listened to the sound, and were satisfied that it was Eddie’s drum. I asked permission to go to his assistance. The officer hesitated, saying that the orders were to march in twenty minutes. I promised to be back in that time, and he consented.

I immediately started down the hill through the thick undergrowth, and upon reaching the valley I followed the sound of the drum, and soon found him seated upon the ground, his back leaning against the trunk of a fallen tree, while his drum hung upon a bush in front of him, reaching nearly to the ground.

As soon as he discovered me he dropped his drumsticks and exclaimed, “O Corporal! I am so glad to see you. Give me a drink,” reaching out his hand for my canteen, which was empty.

I immediately turned to bring him some water from the brook that I could hear rippling through the bushes nearby, when, thinking that I was about to leave him, he commenced crying, saying, “Don’t leave me. Corporal, I can’t walk.”

I was soon back with the water, when I discovered that both of his feet had been shot away by a cannon ball. After satisfying his thirst, he looked up into my face and said, “You don’t think I will die, Corporal, do you? This man said I would not, he said the surgeon could cure my feet.”

I now discovered a man lying in the grass near him. By his dress I recognized him as belonging to the enemy. It appeared that he had been shot through the bowels, and fallen near where Eddie lay. Knowing that he could not live, and seeing the condition of the boy, he had crawled to him, taken off his buckskin suspenders, and corded the little fellow’s legs below the knee, and then laid down and died.

While he was telling me these particulars, I heard the tramp of cavalry coming down the ravine, and in a moment a scout of the enemy was upon us, and I was taken prisoner. I requested the officer to take Eddie up in front of him, and he did so, carrying him with great tenderness and care. When we reached the camp of the enemy the little fellow was dead.

In the following book, you can read about “the littlest hero of the war,” Eddie Lee :

Civil War Sources (Link to posts tagged Drummer Boys) is a blog that uses primary documents as sources for its Civil War posts. While they don’t seem to have posted anything about Eddie Lee, they have covered several other drummer boys, including Johnny Clem, who I have also posted about previously.