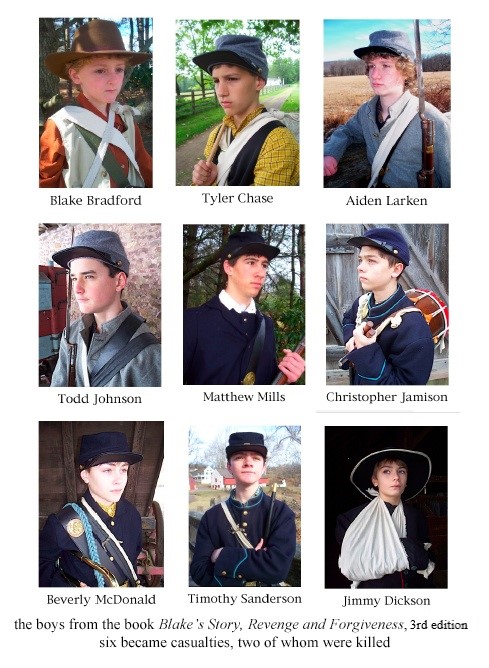 Amidst the excitement of preparing for war, before the first significant battles were fought, the reality of death hit the headlines. Brooklyn Eagle, June 13, 1861, War Intelligence, “The Death of Young McKenzie.” Twelve-year-old Clarence McKenzie was Brooklyn’s first casualty of the Civil War. Death, especially the death of children, became an ever increasing tragedy. Sixteen-year-old Alonzo Roush, stricken with typhoid fever and sent home to recuperate, died, less than two months after his enlistment. Fifteen-year-old William Waldron died of disease before his regiment got to the war. Fourteen-year-old William Havens sent for a minister and was happily converted on his deathbed before disease took him.  Death came quickly before these boys ever got to the war. No one had any idea of the magnitude of death that was about to befall the country.

Clarence McKenzie, the first Brooklyn resident to die in the Civil War. 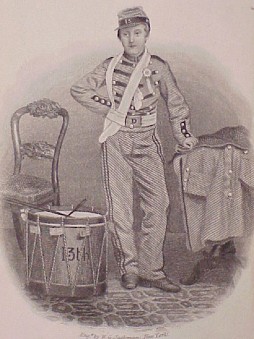 Clarence McKenzie, the drummer boy of Company D, 13th New York State Militia regiment, died after suffering a gunshot wound on June 11, 1861. He was the first Brooklyn casualty of the Civil War. He died by accident, but the 12-year old boy was remembered with reverence by his fellow soldiers, family, friends, classmates, his dog and history.

“He was the smallest in the corps and liked by everyone who knew him, being well- behaved, always in good spirits, and ready and willing to do whatever was asked of him,” an officer in the regiment recalled. “His comrade drummers and drum major were very much affected; they could not have felt worse had he been their own brother.” Rev. Luther Goodyear Bingham compiled this recollection and others into his book about McKenzie, entitled The Little Drummer Boy. Herein he described a very religious boy, the product of many years in the Sunday schools wherever the family lived.

McKenzie joined the regiment on July 9, 1860, and played at the Prince of Wales’ reception in October. The Civil War began with the Confederate attack on Fort Sumter on April 12, 1861, and McKenzie’s regiment was shipped to a Union military facility in Annapolis, Maryland on April 30. On April 30th, before departing for Annapolis, Maryland, by steamer, he showed the bible he had recently received from his Sunday school superintendent to his mother saying, “Mother, I wish to read one chapter to you before I go.” It was the last she would hear him read.

McKenzie’s teachers gathered and bid him a tearful farewell, and his fellow soldiers aboard the ship were struck dumb by the sight of McKenzie kneeling to pray before bed. “I was deeply affected, and the thought came rushing into my mind, ‘that is probably the way in which my praying wife is praying for me, at this very moment,’” a soldier recalled. “Many a heart was compelled to feel, and many an eye glistened with tears.”

McKenzie’s brother William was also a drummer boy in the regiment, and their letters home were full of good cheer, admonitions not to worry and requests.

“Please, dear mother, send me on another cake,” McKenzie said in one post script. “The boys took it all from me — that is a dear good mother. Your Clarry.” In another post- script, McKenzie promised to send his mother a cracker from his rations, “for a sample of what we get.”

Though homesick, McKenzie wrote that he was enjoying the weather, his surroundings and the company of his fellow soldiers.

“Dear mother, do not cry for me, for I am well off, and I hope to return to you in three months or sooner,” McKenzie wrote in his last letter, dated May 28.

McKenzie was sitting beside another drummer with his back against a wall in the drummer’s quarters when the other soldier, William L. McCormick, a best friend, mistakenly shot him with a musket he’d borrowed. The soldier didn’t know the weapon was loaded, according to the regiment’s investigation, and he wasn’t charged with any wrongdoing.

“A few moments previous to drill he was practicing the manual in the drummer’s quarters, and in coming to a charge bayonet his hand struck the hammer of his piece, forcing it down – although he says it was half-cocked – and discharging it, the ball striking Clarence McKenzie in the back, passing through and out at the stomach, and finally striking against a brick wall with such force as to break out part of the brick,” an officer in the 13th Regiment reported.

When struck, Clarence’s first reaction was, “Oh, what will my poor mother say?”

Soldiers gathered around B Company Quarters where McKenzie lay inside, dying. He expressed forgiveness for the soldier who shot him, and when he calmly passed away in the arms of his Captain Balsdon about two hours later, the soldiers “wended their way to their rooms with saddened hearts,” the officer reported. Ladies from Annapolis brought flowers. The body was laid in an ice coffin under an escort of his captain with four men and older brother, Willie.

“The drum major was almost heartbroken,” another soldier recalled. “The gloom cast over the camp was plainly visible in every face.”

McKenzie’s body was given a military escort back to Brooklyn and buried there with full military honors. Mourners packed the church and the streets outside, and McKenzie’s terrier laid down on the earth after it was mounded over his grave.

“For many nights afterwards he was in the habit of going and spending part of the night upon the grave,” Bingham said of the dog, “and toward morning he would return to the house where he belonged.”

In Memory of a Young Civil War Drummer 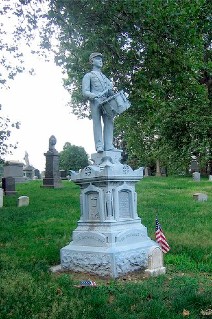 This white zinc statue of a Union army drummer boy memorializes Clarence Mackenzie (1848- 1861), the first Brooklynite to die during the Civil War. Mackenzie was the 12-year-old drummer for Brooklyn’s Thirteenth Regiment. He was killed in a “friendly fire” incident in 1861, while stationed in Annapolis, Maryland. Mackenzie is located within the Soldiers’ Lot area, a section donated by Green-Wood for Civil War soldiers and veterans.

As we have learned in previous posts regarding the role of drummer boys in the civil war, their duties comprised far more than tapping our rhythms; theirs was an important, and often dangerous job. Clarence D. McKenzie, the young drummer for the 13th Regiment, New York State Militia, paid the ultimate price when he was felled by an accidental discharge from a musket. McKenzie was 12 years old when he fell for the final time. His story is a reminder that war is very real and very lethal, regardless of how frequently and to what extent it is often romanticized.

In his tribute to young McKenzie, Luther Goodyear Bingham describes the funeral procession as such:

The funeral of Clarence D. McKenzie, the little drummer boy, who was killed by the accidental discharge of a musket at Annapolis, Maryland, took place from St. John’s Church, corner of Washington and Johnson streets, Brooklyn, at four o’clock in the afternoon of the fourteenth day of July. The body was removed under military escort from the house of the bereaved parents, No. 23 Liberty Street, and placed in front of the pulpit.

The children of Public School No. 8, and of the Sunday school connected with the Presbyterian Church, corner of Tillary and Lawrence streets, to which deceased had been attached, were present and also occupied a large portion of the building. Many wore the emblem of mourning and showed sincere grief at .the loss of their friend and former schoolmate. The press was so great that thousands could not gain admittance. The streets about the church were literally packed with spectators.

After the funeral services the face of the little drummer was exposed to view, and his former companions and classmates passed by and cast a last, sorrowful look upon it. This occupied perhaps half an hour, when the body was borne to the hearse by some of the soldiers of Company D, who brought it to this city. The coffin was enveloped in the American flag, and covered with wreaths of flowers and evergreen. The members of the Thirteenth Regiment now in this city, and the reserve corps, the whole under command of Captain Balsdon, of Company D, formed the escort. Four drummers rolled the funeral march on the way to Greenwood Cemetery, where the body was interred. Three rounds of musketry were fired over the grave, and the solemnities were concluded.

The little brute companion of the drummer boy — his little faithful dog, followed the hearse to the grave, and when the coffin was lowered into it, he went forward and looked attentively down into the grave, to see where they had laid his young master. When the volleys where fired he ran away. When the procession moved away he remained, and when the grave was filled, laid himself down upon it. For many nights afterwards he was in the habit of going and spending a part of the night upon the grave, and toward morning he would return to the house where he belonged.

Information herein was gathered in part from Callow Brave & True by Jay S. Hoar and The Little Drummer Boy by Luther Goodyear Bingham. Both are included in the bibliography found in the third posting.

The changing attitudes of Boys during the American Civil War